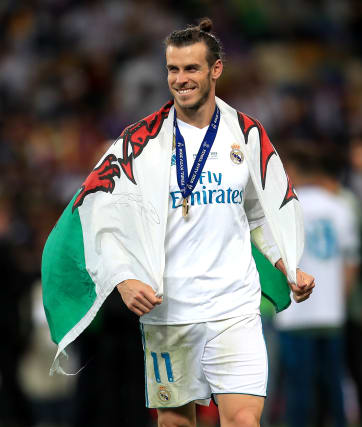 Tottenham boss Jose Mourinho believes Gareth Bale can regain the heights hit at Real Madrid and says he will be used predominantly on the right.

Bale is primed to make his second Spurs debut when West Ham visit on Sunday afternoon, having regained fitness following a knee injury.

The Wales international burst on to the scene a decade ago as a left winger, but then moved into a more central position and produced the sort of form which saw Real Madrid spend a then-record £85million on him in 2013.

He became a world star at the Bernabeu mainly playing on the right – excelling in a front three with Cristiano Ronaldo and Karim Benzema – and now Bale has told Mourinho that is there where his favourite position is.

“One of the first questions in my first conversation with Gareth – because the team is most important thing but the player is important too – was, ‘What’s your favourite position?’,” Mourinho said.

“I wanted to start from there and he answered me the question. Does that mean he will always be used in that position? No.

“Because the most important thing is the team, and he will play where the team needs him to play, but he was very clear by saying his favourite position is on the right.

“It’s not as a number 10, it’s not as a striker, it’s not any more on the left side like he did in the first years of his career at Southampton and Tottenham. His favourite position now is on the right side.

“So, that was a very good starting point of his development here.

“Real Madrid was basically, Bale, Benzema, Ronaldo, with Bale playing fundamentally playing from the right and that’s the position he prefers.”

Plenty has been made about Harry Kane’s position as well, with the England captain so far this season playing as a hybrid of a number nine and number 10.

He is delivering devastating stats, with three goals and six assists in the Premier League, and Mourinho insists Kane is happy to sacrifice some of the goals if it helps the team.

“So if he can do that and explore these areas to help the team and develop his game, why not?

“The only thing that could stop him is a selfish HK who think about him and not the team. But that’s not the case. He’s really a team player. Apart from that, he’s a Tottenham man, so what Harry wants is to win matches.

“And if to win matches he has to score one goal less but make an assist for somebody to score that goal, Harry will be more than happy with that.”

Spurs fans would have loved the chance to see Kane and Bale link up, but a return to stadiums any time soon does not look likely against a worsening coronavirus backdrop.

Instead, they will have to pay extra to watch a forthcoming game with Brighton, which will be shown on pay-per-view, and Mourinho is not enthused.

“I want the fans in the stadium,” he said. “That is my worst feeling above anything, that is what I would like.

“Apart from that what can I say, £14 is a lot of money. You cannot even share with your friends as they cannot come to your house.

“It is difficult. I feel sorry for the fans. But hopefully this stops quick and we can have some people in the stadium.

“Yesterday I was watching an interview with the Porto president in Portuguese television. He was speaking about the contradictions that he feels and I feel.