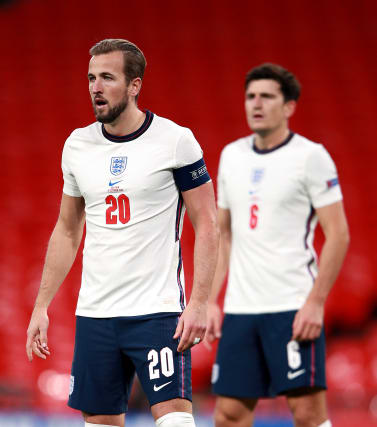 Harry Kane says England’s players will rally around Harry Maguire after a miserable start to the season.

Already under intense scrutiny as Manchester United captain and the most expensive defender in history, focus ratcheted up even further following a high-profile court case in Greece.

Maguire was withdrawn from last month’s England squad after being handed a suspended 21-month prison sentence following an incident in Mykonos during the pre-season break – a verdict the defender denies and is appealing.

The off-season drama appears to have impacted the 27-year-old, whose poor United form translated onto the international scene on Wednesday when he was sent off for collecting two bookings in a wretched 31 minutes.

England went onto lose the Nations League clash against Denmark 1-0 but manager Gareth Southgate threw his backing behind Maguire after the match, as did skipper Kane.

“Harry’s a strong guy, a strong guy mentally,” the Tottenham striker, who has faced flak of his own down the years, said.

“I think any professional footballer, it takes a lot of ups and downs to reach the level that we’re at and H has definitely had that.

“He’s had ups and downs in his career. Obviously it wasn’t his night but he’ll definitely learn from it.

“Football’s a game that can turn around quick. All you can do is learn and work harder and that’s what H will do.

“I’m not worried about him. The boys will get around him. We’ve got another camp in a few weeks and we’ve just got to stick together.

“Things are going to go wrong now and then but I’m so proud of the boys in the way they fought and the togetherness.

“That’s what we’ve got to take away from this week, which was a great week with two good wins against Wales and Belgium as well.”

Kane’s positivity after England’s triple-header came after a Wembley loss that was “hard to swallow” after “putting everything on the line” in a match that saw referee Jesus Gil Manzano make some strange decisions.

Few could argue with Maguire’s red card but the penalty awarded soon after raised eyebrows, while full debutant Reece James was sent off for dissent after the full-time whistle.

England have been shown three cards across their four Nations League matches but Kane said: “I don’t think there’s a problem with discipline.

“When you’re putting your body on the line and every bit of effort you’ve got to try and get something out of the game, and again and again decisions just didn’t quite go our way, it’s hard to take.

“You’ve got a lot of emotion and that’s what I want to see from my squad.

“I want to see emotion, I want to see winners and people who will give everything to win. That’s what we did tonight.

“You’ll have to ask the ref what happened with Reece but, yeah, Reece will learn from it and we’ll get around him and make sure whenever he’s next in the squad he’ll be ready to play like he did tonight because he was fantastic.”

Wednesday’s defeat to Denmark diminished England’s chances of reaching the second Nations League finals as they slipped from top of Group A2 to third.

Southgate’s men face a crunch clash at table-topping Belgium when they reconvene next month, before seeing out a strange and testing 2020 at home to Iceland.

“I think it’s definitely a winnable game,” Kane told beIN SPORTS when asked about the trip to the Red Devils.

“Obviously Belgium are a great side but we’ve shown we can beat them already, so we have to take that confidence into that game, then obviously Iceland here as well.

“We’ve got a quick turnaround, three or four weeks, plenty of games for our club now.

“But, yeah, for sure we’ll be back again in a few weeks ready to go and I definitely think we can take positives from this performance.”

Concussions mean Stevie Ward is thinking seriously about the future