Project Big Picture ‘will destroy the game in this country’, says Nicola Palios 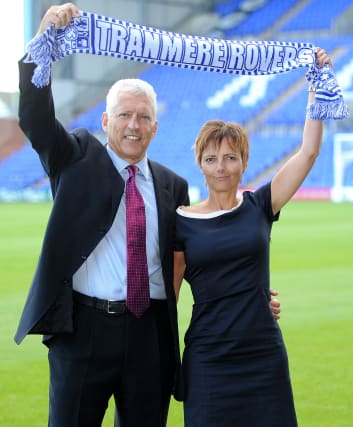 The Project Big Picture proposals have been likened to “someone offering you a million pounds but shooting you soon after” by Tranmere co-owner Nicola Palios.

EFL chairman Rick Parry is working on the revolutionary proposals with the support of Liverpool and Manchester United.

They include an immediate £250million rescue package for EFL clubs starved of matchday income by the coronavirus pandemic and the promise of a 25 per cent cut of future Premier League media revenues.

But it also conveys a greater say over the game’s governance to the Premier League’s big six, something Palios is deeply concerned about.

“There are some clear good elements to Project Big Picture but they are hugely outweighed by the downsides that will destroy the game in this country,” she wrote on Twitter.

“Once you’ve given all the power to a small group they can do what they want.

“B teams would be with us in a heartbeat. The EFL would get 25 per cent of the TV money but only after the best of all the games are taken away from TV to be streamed by the big clubs. And what’s to stop them changing the distribution methodology in future, to say 10 per cent?

“We must not be blinded by the short-term offer of a cash lifeline. It’s like someone offering you a million pounds but shooting you soon after.”

Parry said on BBC Radio Four’s Today programme on Monday morning that the 25 per cent share of revenues would be “in perpetuity” but it is understood those behind Project Big Picture accept there are no such guarantees.

Bolton chairman Sharon Brittan spoke more positively about the plans in a statement on her club’s website, describing them as a useful “first step”.

“We are fully in favour of steps which can be taken to address the inequitable distribution of finances between the Premier League and EFL,” Brittan wrote.

“The summary details of Project Big Picture appear to go some way to help drive sustainability for the EFL’s member clubs and this can only be a good thing for clubs’ long-term growth and the communities in which they are based.

“Bolton Wanderers’ recent history shows how important a football club is to the local community and that the model of football clubs relying solely on owner funding is broken.

“This town came very close to losing its club and the board believes that radical change has long been required to create a football pyramid which allows clubs at the lower levels to be sustainable yet be competitive on the field.

“We hope that conversations around Project Big Picture are the first step on this path.”

Former Arsenal manager Arsene Wenger believes there is a need for a long-term solution.

“If nothing happens, the smaller clubs will die. I don’t think that one payment will sort out the problem. The problem is much deeper than that,” Wenger said at a Sky event on Monday.

Downing Street has condemned the “backroom dealing” behind Project Big Picture, while the Premier League says it will have a “damaging impact” on the game, and affect the strength of the competition.

It has been reported that the Football Association would use its ‘golden share’ in the Premier League to veto the proposed plan if it came forward.