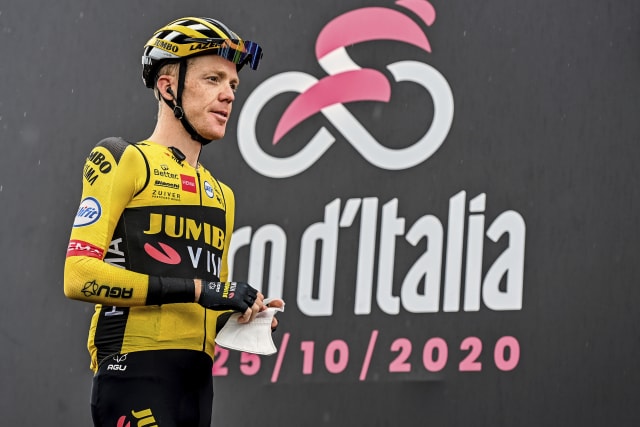 Steven Kruijswijk’s Jumbo-Visma team have joined Mitchelton-Scott in withdrawing from the Giro d’Italia after tests conducted on Monday’s rest day returned eight positive results for coronavirus among riders and staff.

Kruijswijk was one of two riders to test positive along with Australian sprinter Michael Matthews of Team Sunweb after a total of 571 tests were conducted on riders and staff since the end of stage nine on Sunday evening.

There were a further six positive tests involving team staff members, four of them within Mitchelton-Scott who subsequently announced they would withdraw from the race entirely three days after their team leader Simon Yates became the first rider at the race to test positive for the virus.

Shortly before the race resumed with Tuesday’s 177km stage from Lanciano to Tortoreto began, Jumbo-Visma announced they too would withdraw all eight riders in the wake of Kruijswijk’s positive test.

It means the rest day tests led directly to the withdrawals of 14 riders as the Giro suffered the most significant outbreak of the virus at a single race since the season resumed in late July – renewing questions over whether the Italian Grand Tour will reach Milan as scheduled on October 25.

Jumbo-Visma sporting director Addy Engels said: “In our opinion this is the most responsible decision with one positive case in the team, being Stevie.

“We’ve all been close to him and looking at what happened with Mitchelton with one case and now another four, we’ve decided to take the most responsible decision as we look to the health of our riders and staff.

“Until now it’s been a roller coaster and that’s why his decision has been made…Riders have been in touch with Stevie and if they continue for another week then it could be another couple of positives. This is the safest way for us, for the team and the continuation of the Giro.”

Notably one of the team’s riders, Jos Van Emden, told the Cycling Podcast on Monday that there was poor social distancing at team hotels, raising questions over the race bubble.

The exit of the luckless Kruijswijk means the Giro has now lost two of its pre-race favourites to coronavirus following Yates’ exit.

The 33-year-old Dutchman, who crashed while leading the 2016 edition during the final days, had targeted the Giro after a crash at the Criterium du Dauphine in August ruled him out of the Tour de France.

Jumbo-Visma said their team leader was not showing any symptoms or feeling unwell prior to receiving his positive test.

“I just feel fit,” Kruijswijk said on the team website. “I can’t believe I got it. It is a very big disappointment to get this news. It is a pity that I have to leave the Giro this way.”

Team manager Brent Copeland said: “Unfortunately we received the news on Monday evening that we have returned a number of positive Covid-19 results to members of our staff after our third round of tests in three days.

“As a social responsibility to our riders and staff, the peloton and the race organisation we have made the clear decision to withdraw from the Giro d’Italia.”

According to Team Sunweb, Matthews, who had been third in the points classification behind Arnaud Demare and Peter Sagan, was asymptomatic and “felt healthy” after getting his results.

On Twitter, the 30-year-old wrote: “Just got the news that I’ve returned a positive test for COVID-19. Disappointed that this is the way the Giro ends for me after a fantastic first week with the team. For now,

The other positive tests involved staff from the Ineos Grenadiers and AG2R La Mondiale.

“I don’t think there’s a big risk,” he said. “For sure there are a number of cases. We have already done 1,500 tests for Covid-19 and the result is there is a team (Mitchelton-Scott) that is more concerned than others.

“Our protocols are the same as every big sporting event. Like in everyday life, the more you test, the more you find positive cases. Now the number of cases seems low to me and we’re confident.”

Will Connors and Hugo Keenan set for Ireland debuts against Italy