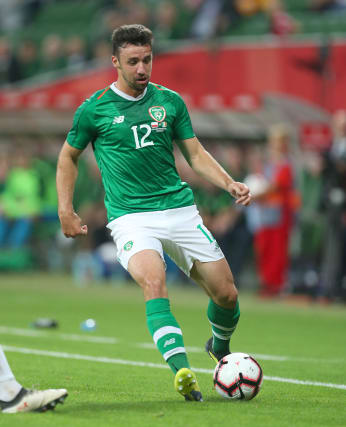 Enda Stevens has insisted he and his Republic of Ireland team-mates feel safe inside their bubble as they attempt to balance their health with playing international football.

Stephen Kenny’s squad has been rocked in the last week by positive Covid-19 tests which have robbed the manager of a number of players, most significantly the withdrawals of Aaron Connolly and Adam Idah hours before last Thursday night’s penalty shoot-out exit from the Euro 2020 play-offs in Slovakia.

With two unnamed players having since returned positive results and a series of close contacts self-isolating, the squad which will face Finland in the Nations League on Wednesday evening is very different to the one which met up last weekend.

However, asked if he felt safe, Sheffield United defender Stevens said: “Obviously we feel safe. It’s our first experience with it all happening, club and country, but it’s just something that we’ve been living with for the past months.

“As I said, it’s new to a lot of us, but it’s just something you have to get on with. It’s here and it’s not going anywhere soon, but we have to trust in the doctors and the staff here. They’re doing their very best to keep us safe and hopefully they can.”

Having seen both false positive and false negative results in recent days, the testing regime has been called into question, although Stevens does not want to get involved in that.

He said: “I’m no scientist, I’m no doctor, I just want to play football, so as long as my test comes back negative, I’m happy enough.”

Ireland will run out in Helsinki having won none of their previous seven Nations League games and with Kenny still awaiting a first victory in four attempts since he replaced Mick McCarthy.

He and his players firmly believe they should have beaten both Slovakia and Wales, with whom they also drew 0-0 on Sunday, after creditable performances, and Stevens is confident they are not far away as they attempt to avenge last month’s 1-0 home defeat by the Finns.

He said: “It’s just been unfortunate that we haven’t hit the net. It’s probably the bit of luck that we need. The confidence boost that we’ll get from scoring goals will only help us grow.