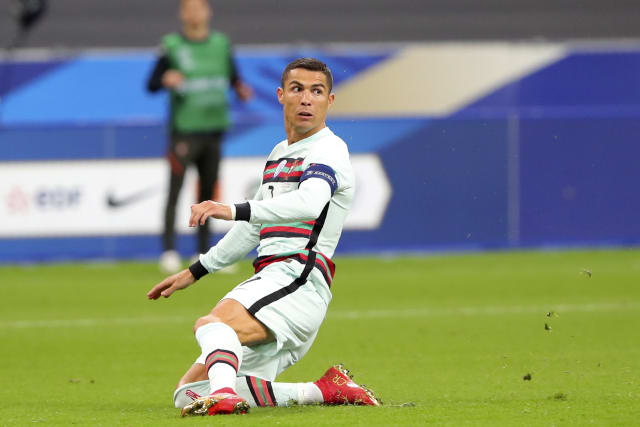 Five-time world footballer of the year Cristiano Ronaldo has tested positive for coronavirus.

The 35-year-old Juventus forward is "doing well, without symptoms, and in isolation," the Portuguese Football Federation (FPF) said in a statement.

"Following the positive case, the remaining players underwent new tests this Tuesday morning, all with a negative result," the FPF statement added.

The Republic of Ireland will also be without an unnamed player for their game in Finland on Wednesday following a positive test. Manager Stephen Kenny has not called up a replacement.

A statement from the Football Association of Ireland read: "The player, who initially tested positive for Covid-19 on Sunday night, is now out of the Ireland squad for the UEFA Nations League game in Finland after the second of two tests on Monday produced a positive result."

Meanwhile, Crewe's League One fixture at Oxford has been postponed for a second time.

The match had been rearranged for Tuesday after being called off just 30 minutes before the original kick-off time on October 3 when a Crewe player tested positive.

A statement from the EFL said that Crewe "have determined they are unable to fulfil the fixture".

Paul Warne, the Rotherham manager, has entered a period of self-isolation after one of his family members tested positive.

Warne will miss the Millers' Championship games against Norwich on Saturday and Nottingham Forest next Tuesday. Assistant boss Richie Barker and first-team coach Matt Hamshaw will be in charge on the touchline with Warne involved via video link.

Warne said: "At this moment, I don't have coronavirus, I don't have any symptoms, but because of Covid restrictions, I have to self-isolate and stay away from the squad for two weeks."

World number one golfer Dustin Johnson was another high-profile sportsman to test positive on Tuesday.

The American was tested after "experiencing symptoms", according to a statement from the PGA Tour, and has withdrawn from this week's CJ Cup after the positive result. South Africa's Jbe Kruger was earlier withdrawn from the Scottish Championship after also testing positive.

In rugby league, Challenge Cup finalists Salford have been hit by two positive test results on players just four days before their Wembley showdown with Leeds.

The unnamed pair are now self-isolating, as are two other players as a precaution after results of tests came back inconclusive.

The Red Devils were already without eight other players due to injury for Tuesday's Super League match against Hull KR at Warrington but decided to honour the fixture to protect the competition's integrity.

That game, however, had already come close to being called off after Rovers reported tests on two of their players had also been inconclusive earlier in the day.

At one stage Rovers had only 15 players available before they were told certain individuals would be able to play. The afternoon kick-off was put back an hour while the matter was resolved.

Coach Tony Smith said: "We were sat on the bus for an hour and a half or so while they decided how we were going to attack this, whether we kept going with it or not. We're grateful and probably lucky to be playing. It was close."

In snooker, Peter Lines became the latest player to withdraw from the English Open in Milton Keynes after testing positive. His son Oliver Lines, also competing, was forced to pull out as well due to his close contact despite testing negative.