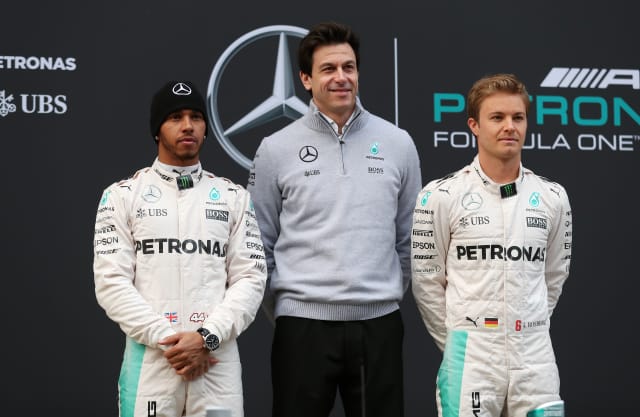 Hamilton will begin his quest to draw level with Michael Schumacher’s victory record at Sunday’s Eifel Grand Prix from second on the grid after he was beaten to pole position by Valtteri Bottas.

Hamilton trailed Bottas by 0.256 seconds at the Nurburgring as the Finnish driver claimed his third pole of the season.

Despite losing out to Bottas on Saturday, Hamilton holds a 44-point lead in the standings as he goes in search of a record-equalling seventh world crown and his sixth title in seven years.

Wolff has overseen Hamilton’s remarkable run of success, with the Austrian also on course to take the world champions to an unprecedented seventh consecutive drivers’ and constructors’ championships.

But the 48-year-old’s future is uncertain with his contract up for renewal at the end of the year. Hamilton’s deal is also due to expire in less than three months.

Rosberg spent seven years at Mercedes – a stint which climaxed in him beating Hamilton to the 2016 title – and believes Wolff’s potential exit might derail his former team.

“If Toto goes it could potentially have a spiralling effect,” Rosberg told Sky Sports. “Many of the team leaders at Mercedes could say: ‘OK, it is the end of an era, Toto is going, let’s also move on to something new’. That could be a really bad turn of events for the team.

“Lewis is very convinced that Toto is an integral part of the success, which is true, because he absolutely is.

“It is not guaranteed that if Toto goes and there is a new leader, the stability remains.”

Responding on Saturday night, Wolff said: “With the schedule, we don’t have time to sit down with Lewis and have a chat, and it is the same for my own contract.

“Things are happening in the background and are being negotiated but it is not so simple because there is the shareholding and how we are continuing.

“From the (Mercedes’ parent company) Daimler side and myself we want to continue to work in the partnership we have, and for Lewis he wants to be in the quickest car. It seems obvious but we need to find the time to sit down and discuss it.”

Mercedes claimed another front-row lockout despite seeing six members of staff sidelined as a knock-on effect of two confirmed coronavirus cases within the team.

Hamilton was denied his historic 91st win at the last round in Russia a fortnight ago. But the British driver insists the milestone will not be at the forefront of his mind on Sunday.

“It is not something I am particularly thinking about,” said Hamilton. “If and when it happens, great, but right now Valtteri is ahead of me.

“I am not really bothered about it. I know you keep asking questions, but I am solely focused on doing the best job I can. I am not looking short-term but further ahead.”

Nico Hulkenberg was handed his third substitute appearance of the season after he received a late call-up from Racing Point to deputise for the unwell Lance Stroll, who is understood to be battling a stomach bug.

Hulkenberg, who filled in for Sergio Perez at the British and 70th Anniversary Grands Prix at Silverstone after the Mexican contracted coronavirus, arrived at the Nurburgring following a 90-minute dash from Cologne.

The 33-year-old arrived at the track less than three hours before qualifying and after returning a negative test was given the green light to participate, finishing last of the 20 runners.

One spot ahead of him on the grid will be veteran Kimi Raikkonen, 40, who will start his 323rd F1 race on Sunday to surpass Rubens Barrichello as the most-capped driver in grand prix history.