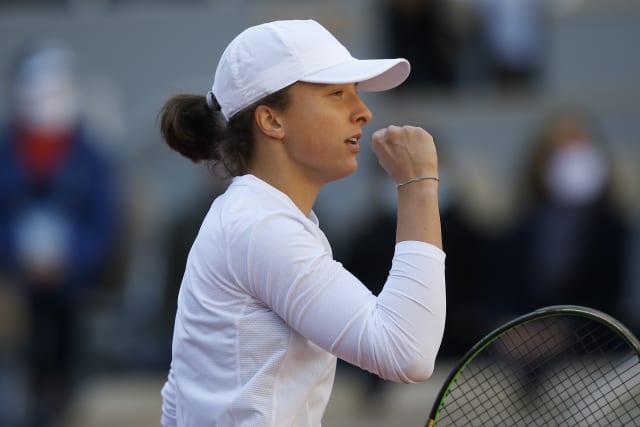 The rock and roll fan has blasted her way through the draw and swept to the trophy without dropping a set, the 6-4 6-1 victory over Australian Open champion Kenin the icing on the cake.

When her final forehand flew past Kenin, Swiatek put her hand over her mouth in sheer disbelief before heading off to celebrate with her supporters in the stands.

At 54 in the world, Swiatek is the lowest-ranked woman ever to win the French Open and the second unseeded champion in four years after Jelena Ostapenko in 2017. She is also the youngest Roland Garros winner since Monica Seles in 1992.

Swiatek’s results this fortnight made hype inevitable, not least her dismantling of top seed Simona Halep in the fourth round for the loss of just three games.

She handled it with the nonchalance of youth and there were no signs of nerves as she began the match by winning three games in a row, her heavy forehand and intelligent placement causing immediate problems for Kenin.

It was a strange situation for the young American who, despite being a grand slam champion, is still inexperienced at this level herself and would not have expected to be in this position in a final.

Unlike Swiatek, she had had to battle to make it to the title decider, losing four sets along the way, and she composed herself well to level at 3-3.

The next two games were crucial to the direction of the match. Swiatek, who travels with a psychologist, withstood pressure to halt the run of games against her and hold for 4-3 before breaking Kenin.

Kenin saved one set point and broke back for 5-4 but her serve was under constant pressure and Swiatek took her second chance.

Kenin needed a strong response and she broke Swiatek again to start the second set but back came the Pole with two more games and at that point Kenin called for the trainer.

She headed off court to have more strapping applied to her already-well-bandaged left thigh, with Swiatek using the time to practise her serve.

If Kenin had hoped her opponent’s momentum might have been disrupted, she was to be disappointed, with Swiatek losing just three more points as she cruised to the title.