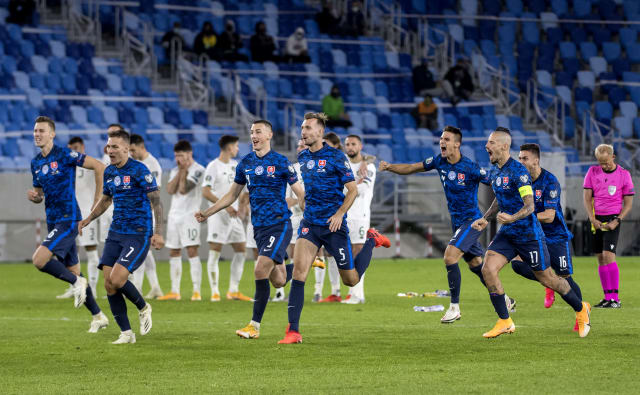 Northern Ireland’s dramatic penalty shoot-out victory over Bosnia and Herzegovina sets up a Euro 2020 qualifying play-off final against Slovakia in Belfast next month.

Slovakia came through a shoot-out of their own, beating the Republic of Ireland on spot-kicks after a goalless draw in Bratislava on Thursday night.

Route to the final

Thursday’s penalty shoot-out victory over the Republic of Ireland was notable in that, for 120 minutes, Slovakia managed not to concede. It was only their second clean sheet in the last 18 months, the other coming in a 2-0 win over Azerbaijan in November last year. That was one of their four wins in the regular qualifying campaign as they beat both Hungary and Azerbaijan home and away, with a 1-1 draw at home to Wales their only other point.

Steven Davis may have made Northern Ireland history with his record-breaking 120th cap on Thursday night, but he remains behind Marek Hamsik who is now up to 121. The former Napoli midfielder would have been further ahead but he missed last month’s internationals as he was not allowed to travel back from China, where he now plays for Rafael Benitez’s Dalian Pro, because of the pandemic. Pavel Hapal had other selection problems this month, with Inter Milan defender Milan Skriniar absent after testing positive for coronavirus while Stanislav Lobotka was not allowed to travel due to positive cases at Napoli. Robert Bozenik was surprisingly left on the bench against the Republic despite regularly scoring in qualifying, and he added another dimension when he came on in extra time.

Pavel Hapal was a DFB-Pokal winner with Bayer Leverkusen during a playing career in which he had four spells with his first professional club Sigma Olomouc while also turning out for Tenerife and Sparta Prague among others. His international career saw him capped 21 times by Czechoslovakia and 10 times by the Czech Republic following the split. His biggest success as a club manager came when he won the Slovakian Superliga title with MSK Zilina in 2010. In charge of the national team since October 2018, Hapal has won six and drawn four of his 15 games in charge. The 51-year-old favours a 4-3-3 formation.

FIFA’s world rankings currently shows Slovakia two places above Northern Ireland in 36th place in the world. Both sides struggled in their first Nations League campaign, but Slovakia did at least claim one victory – over Ukraine – while Northern Ireland lost all four of their games. Both sides were only spared relegation to League C when the competition was reformatted. Last month, Slovakia started the new Nations League campaign last month with a 3-1 home defeat to rivals the Czech Republic and a 1-1 draw in Israel.