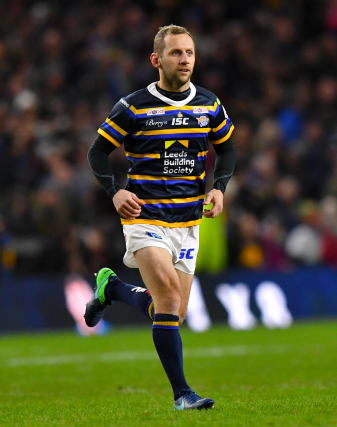 Former Leeds scrum-half Rob Burrow has turned down an invitation to attend the Coral Challenge Cup final later this month between the Rhinos and Salford.

There had been speculation that Burrow – a two-time Challenge Cup winner who revealed he had been diagnosed with motor neurone disease in December last year – could lead out Leeds or present the trophy to the winning captain.

Coronavirus restrictions around social distancing mean nobody will be handing over the trophy and although the Rugby Football League and Leeds had hoped to involve Burrow in some capacity at Wembley, the 38-year-old has decided to watch the action unfold on October 17 from the comfort of his own home.

“I would like to thank the club and the RFL for all the support they have offered me and the kind invitation to be part of the Challenge Cup final,” he said.

“However, I’ve decided to stay and watch the game at home, like millions of other rugby league fans around the country, with my family. I would like to wish both teams the best of luck for a special day.”

Burrow received an outpouring of support after revealing that he had been diagnosed with the rapidly progressing disease that affects the brain and spinal cord.

The former Great Britain half-back is now making more use of a wheelchair and has experienced a significant deterioration of his voice in recent months.

Kevin Sinfield, a former team-mate of Burrow and now Leeds director of rugby, said: “Having spoken with Rob and his wife Lindsey, I know it has been overwhelming to see the support Rob and his family have had from the general public in recent weeks especially with everything else that is going on in people’s lives.

“I know from having played alongside him, that playing in the Challenge Cup final and running out at Wembley was one of the biggest highlights of his career and he hopes everyone saviours the moment despite the fact that fans can not be there.

“Rob is anticipating a fantastic final and looking forward sitting down with his kids to enjoy it.”