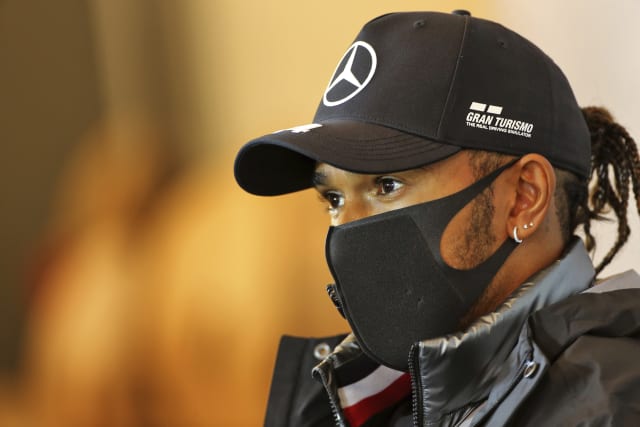 Mercedes boss Toto Wolff says Lewis Hamilton is “living like a hermit” to ensure his world championship bid is not derailed by coronavirus.

Hamilton’s Mercedes team have been forced to fly six replacements from their Brackley base in Northamptonshire to Germany for this weekend’s Eifel Grand Prix after two team members tested positive here at the Nurburgring.

In all, seven Mercedes staff have been sidelined for a potentially historic race in which Hamilton is bidding to match Michael Schumacher’s record of 91 victories.

Four members who came into contact with the infected individuals returned negative results on Friday, but the quartet will not be involved for the remainder of the weekend. A fifth individual’s test came back as inconclusive.

Hamilton has admitted he is battling loneliness in his pursuit of a record-equalling seventh world crown. The Briton’s bubble consists of his physio, New Zealander Angela Cullen, and assistant Marc Hynes.

Hamilton heads into the 11th round of 17 with a 44-point lead over Bottas in the championship.

“It is certainly not a great situation for the drivers because you almost need to live like a hermit,” said team principal Wolff at a sodden Nurburgring on Friday.

“They are the most restricted members of the whole team. They are at home, they are not going out for dinners, they are not meeting any other people within the team.

“We do our debriefs via Zoom so they are not sitting with the engineers. We avoid any personal contact with them. They step into the car, we keep our distance while we belt them in and then they drive.

“It is really critical for the championship because you can miss a race or two if you test positive, so unfortunately for them they have to live a life that is secluded.”

Wolff said he is hopeful that the enforced changes to his team will have little impact on what could be an unpredictable weekend.

Both practice sessions were abandoned at the Nurburgring – a venue Formula One has not visited since 2013 – following bad weather on Friday.

Persistent drizzle and fog meant the medical helicopter was out of action, and race director Michael Masi refused to take any risks with the nearest hospital in Bonn a one-hour drive away.

That decision denied Mick Schumacher, the son of seven-time world champion Michael, his chance of a grand prix debut.

The 21-year-old, who leads the Formula Two series, the feeder championship to F1, had been due to practice for Alfa Romeo.

His mother Corinna was in attendance here at a venue where her husband triumphed on five occasions. The condition of the 51-year-old remains a closely guarded secret following his skiing accident on the French Alps almost seven years ago.

Four-time world champion Sebastian Vettel, who is sporting a crash helmet in tribute to his hero this weekend, said: “Mick deserves his shot, and hopefully we see him in the car next year.”

It is understood Schumacher is closing in on a deal to race for Alfa Romeo in 2021. An announcement – which would see the Schumacher name return to the grid for the first time since 2012 – could be made later this month.