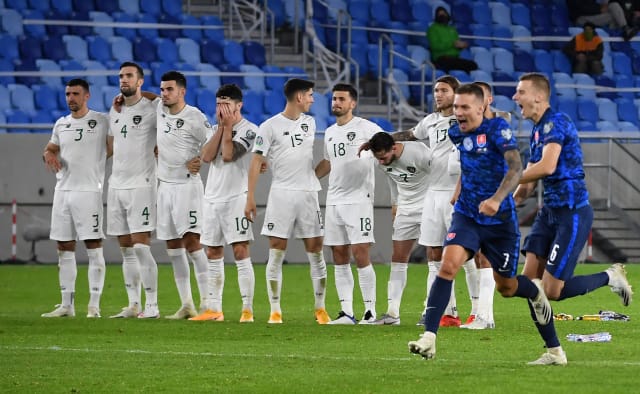 The Republic of Ireland’s Euro 2020 finals dream died in agonising fashion with a play-off semi-final penalty shoot-out defeat in Slovakia.

Stephen Kenny’s men created more than enough chances to win the tie in Bratislava, but ultimately went out after a 0-0 draw as the home side held their nerve from the spot.

Here, the PA news agency takes a look at what we learned from a disappointing evening at the Narodny Stadium.

There is cause for optimism

Kenny has now taken charge of three games as Ireland manager and is yet to taste victory, although there were signs in Bratislava of what he wants to do. In the recent past, Irish teams have been difficult to beat and often not much else. The new manager believes there is enough talent at his disposal to take a more progressive approach, and that was evident as front three Callum Robinson, David McGoldrick and James McClean, aided and abetted by midfielder Jeff Hendrick, executed a high press to allow James McCarthy and Conor Hourihane and full-backs Matt Doherty and Enda Stevens time on the ball in space. Encouragingly, the Republic created the kind of genuine chances from open play which have previously been in short supply.

Fate can be a cruel mistress

Just how different things might have been in Slovakia had strikers Aaron Connolly and Adam Idah not been ruled out by coronavirus protocols shortly before kick-off, we will never know. It is understood 20-year-old Brighton frontman Connolly, who graduated to the senior team from Kenny’s Under-21s during predecessor Mick McCarthy’s reign, had been named in the team and was replaced by McClean at the last minute. The Slovaks themselves had lost defender Milan Skriniar and midfielder Stanislav Lobotka as a result of Covid-19 regulations, but with more time to draw up an alternative plan.

No goals, no wins

For all Ireland’s enterprise, they failed to find the back of the net in 120 minutes of football when doing so just once would have kept their dream alive. Their eight qualifiers brought just seven goals in total, three of them against minnows Gibraltar, and that lack of firepower proved costly once again when it mattered most. McClean and Hourihane saw efforts cleared off the line, while substitute Alan Browne was denied by goalkeeper Marek Rodak and in extra-time, the woodwork.

The case for the defence

Kenny’s insistence on front-foot football means there is less protection for his defence, and they looked less than secure at times in last month’s Nations League fixtures against Bulgaria and Finland. However, keeper Darren Randolph, Doherty, Shane Duffy, John Egan and Stevens were good value for their clean sheet in Bratislava with Randolph making one first-half save from Ondrej Duda and Duffy clearing substitute Lukas Haraslin’s second-half effort off the line during what proved to be a relatively straightforward evening for the men at the back.

If a new broom sweeps clean, change for change’s sake is rarely a good idea. Kenny blooded 19-year-old Norwich striker Idah and Brighton midfielder Jayson Molumby, 21, last month and has started Doherty in all three games to date. However, Connolly’s misfortune in Slovakia saw stalwart McClean handed another chance, and his high-energy display served as a reminder of his past contributions for his country, while the intelligence and creativity of experienced frontman David McGoldrick were invaluable.