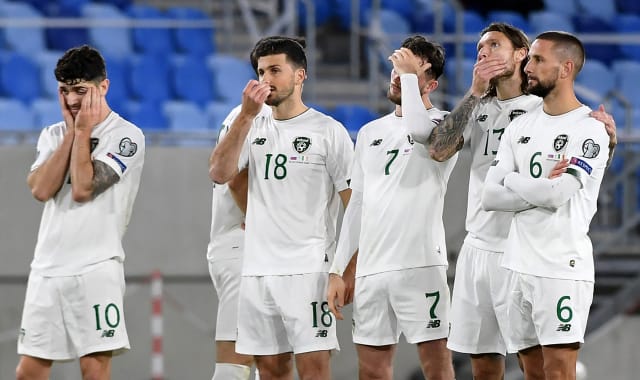 Alan Browne and Matt Doherty suffered penalty shoot-out misery as the Republic of Ireland bowed out of the Euro 2020 play-offs in agonising fashion against Slovakia in Bratislava.

Stephen Kenny’s men created the better chances in the game which ended 0-0 after extra-time, during which substitute Browne hit the post, but went down 4-2 on penalties.

As a result, it is Slovakia who will meet Northern Ireland in next month’s final and the Republic will not get to play in a finals tournament for which Dublin is one of the host cities.

Browne and Conor Hourihane both might have won it, although it took a fine goal-line clearance by skipper Shane Duffy from substitute Lukas Haraslin to ensure the tie went all the way.

Ultimately, it came to a test of nerve and character, of which the Republic have long held abundant supplies, but it was not to be their night as Marek Hamsik, Patrik Hrosovsky, Haraslin and Jan Gregus scored from the spot, a feat only Hourihane and Robbie Brady could match.

The absence of Aaron Connolly and Adam Idah from the Ireland squad after a second member of the backroom staff had tested positive for coronavirus was a late setback, and Slovakia eased into their stride and keeper Darren Randolph had to move smartly to intercept Hamsik’s teasing 16th-minute pass to Jaroslav Mihalik.

The visitors were guilty of surrendering possession cheaply as they attempted to build momentum, leaving full-backs Doherty and Enda Stevens struggling to make an impact in the opposition half, while set-piece specialist Hourihane was unable to make the most of a series of early opportunities.

They did put together a cohesive move on the half-hour when, after James McClean had dispossessed Ondrej Duda on the left, Jeff Hendrick surged forward before returning the ball to the winger, whose cross was headed over by David McGoldrick under pressure.

Ireland were growing into the game and it took a goal-line clearance from Martin Valjent to prevent them taking a 37th-minute lead through McClean’s effort after Hourihane had laid off Doherty’s cross.

However, Duda would have fired Slovakia ahead in stoppage time had Randolph not thrown himself to his left to palm away his well-struck shot, and the West Ham keeper was relieved to see the same man send an acrobatic second effort past the post from the resulting corner.

Ireland very nearly took the lead six minutes after the restart when, after McClean had been fouled by Albert Rusnak, Hourihane whipped in a free-kick which Hamsik headed just wide of his own goal as he attempted to clear it.

Browne almost made a significant impact with 20 minutes remaining when, after McGoldrick had turned smartly to feed Stevens, he ran on the the full-back’s cross, took a touch and fired in a drive which Fulham keeper Marek Rodak managed to beat away at his near post.

However, Duffy had to be equally resilient at the other end with 15 minutes remaining when Haraslin accepted Hamsik’s pass, turned into space and dispatched a shot which seemed destined to ripple the net until the Celtic defender covering on the line stabbed it away in the nick of time.

Hourihane passed up a glorious opportunity to win it when he scuffed a right-foot shot at goal from close range after McGoldrick had carved his way into the box, and extra-time was required.

McGoldrick and Browne both went close as Ireland resumed in positive mood, and Slovakia were when Browne met Callum O’Dowda’s 105th-minute pull-back ahead of Rodak, only to see his effort come back off the upright.