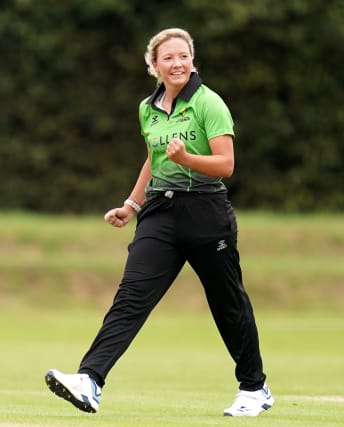 England Women’s Katie George is excited to play in next year’s The Hundred after her being retained by Welsh Fire and believes the tournament can generate a wider audience for the sport.

The first 18 players confirmed to take part in The Hundred were revealed on Thursday, with George among the eight women’s players to have rolled over their contracts, including six from England and two West Indians.

When asked about next summer’s tournament, George told the PA news agency: “(It’s) pure excitement really. It’s almost like the delay has made me more excited to play.

George added: “I was gutted when it got cancelled, I was really looking forward to it but then it’s almost made me even more excited to get started next year.”

On the importance of the tournament for the women’s game, George added: “The new people coming in, all the advertising going into it, it’s going to be on Sky, it’s going to be on the BBC, it’s just going to be a wider audience, it’s getting girls playing closer to that professional bracket now that there’s a clear pathway to the international stage.”

The 21-year-old was a member of the England Women’s squad this summer, and was involved in the training bubble, and claimed the close proximity helped the squad bond.

“It was definitely different to what we’re used to. But I think the way the ECB put it on everything was there for us and more really.

“It took probably a few days to acclimatise, know where you’re going to get your food, what the plan is but honestly personally I didn’t find it too bad.

“You’ve got support from the support staff, you’ve obviously got FaceTime. There was also a team room where we spent most of our time in – had an Xbox, had a pool table, darts so it was actually really nice to spend time together as a team and really bond whereas naturally you sort of have your little groups that you naturally gravitate towards and get on best, but you speak to people who you don’t necessarily speak to about things away from cricket so personally I think it helps us as a team to bond and knit together.”