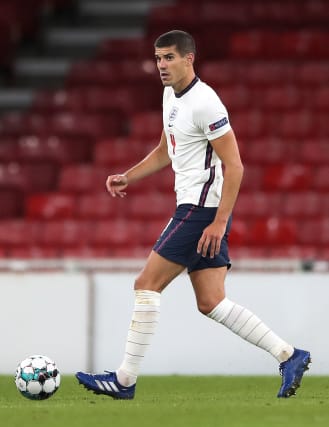 Conor Coady is banking on being able to get more sleep after he realises another boyhood dream of playing at Wembley for England.

The Wolves defender is primed to win his second cap for the Three Lions against Wales on Thursday, a month after making his debut in Denmark.

After that 0-0 draw in Copenhagen, Coady did not get home until 3.30am and then was woken a couple of hours later by his young family wanting to congratulate him.

He may have been blurry eyed, but it was a price worth paying for the 27-year-old.

“It was all a bit of blur. I travelled home from Denmark and got home about 3.30 in the morning,” he said. “My wife woke up and said she was proud and things like that.

“My kids woke me up a couple of hours later. I have a five-year-old, a three-year-old and one-year-old and they are all football mad and they came jumping on me at 6 o’clock so I never had that much sleep.

“But honestly it was incredible. Everyone was saying how proud they were. It was an amazing occasion for all my family and something I’ll remember for the rest of my life.

“My whole life I’ve dreamed of doing that for my country.”

Coady will not be able to celebrate with his family when he plays against Wales, with Nations League games against Belgium and Denmark on the horizon.

But the achievement will be no less special for him.

“It will be incredible. Last time was a dream come true,” he said. “Every call up is a proud moment and to know all three games are at Wembley is absolutely incredible.

“To play there for England would be amazing.”

Coady and his Three Lions team-mates endured a difficult start to the current camp as they held a team meeting on Monday to talk about the responsibilities they face being an England player.

It came in the wake of Tammy Abraham, Ben Chilwell and Jadon Sancho flouting coronavirus guidelines by attending a party on Saturday, which followed similar indiscretions by Phil Foden and Mason Greenwood in Iceland last month.

Coady shook off suggestions the squad was ill-disciplined and reiterated how proud he is to represent his country.

“The lads have been absolutely incredible with me and all the new lads,” Coady said. “It’s been even more than I thought they were going to be like with us.

“We had a meeting at the start of the week where we squashed everything that was going on, we did it at the right time.

“The gaffer spoke and he’s sorted out with his staff what’s gone on.

“Looking at new players coming in, it’s just how proud we all are to be playing for our country. The pride I get is incredible.

“All I want to do is to help this team moving forward. In terms of things that have gone on, it’s been talked about and we’ve been focusing all week to move forward and get better.”