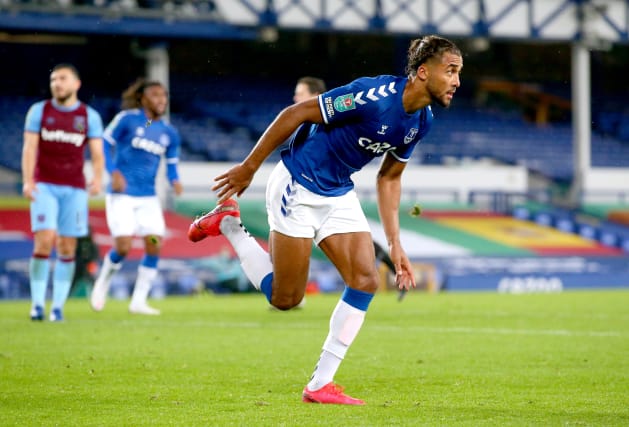 Dominic Calvert-Lewin hopes he will not be getting the silent treatment from his father if he makes his England debut this week.

The Everton striker is in the Three Lions senior squad for the first time after a sensational start to the season for his club.

Calvert-Lewin has scored nine goals in six games in all competitions this season, including two hat-tricks, and looks a good bet to get the nod from manager Gareth Southgate for the games against Wales, Belgium and Denmark over the next eight days.

Pulling on the England shirt would cap an impressive journey for Calvert-Lewin, who has come a long way since being driven to games around Sheffield by his dad as a youngster.

He was never left in any doubt about how his father rated his performances back then and that is why he hopes to be getting a call from him if he does win his first cap.

“For my dad, he’s my biggest fan,” he said. “From a young boy, I always looked for his opinion to gauge how I was playing.

“If I played well, he would speak to me in the car. If I didn’t play well, sometimes he wouldn’t speak to me.

“From early on, that was a mental learning curve. I know he’s the proudest man on the planet at the minute. I’m very grateful for his backing and one thing he has always said is just believe in yourself and believe in your ability.

“It doesn’t matter where you come from. It’s about backing yourself and believing you can get there.

“I think that is the only disappointing thing that my family can’t be here to watch it, but that is the nature of the beast at this moment in time.”

As well as some tough love from his father, a loan spell at Stalybridge Celtic also helped shape him.

As a teenager he was sent to Stalybridge from Sheffield United and was given a tough introduction to non-league life.

“I don’t know if you can see, I’ve still got the scar under my eye from the first 20 mins of playing for Stalybridge,” he said. “I played the rest of the game with one eye because this one closed up.

“That experience at the time – it was the most I’d ever enjoyed my football up to that point.

“It was thoroughly enjoyable and it just gave me that sense of what it was to play in front of fans and to play proper men’s football and play for three points.

“At 17 it was definitely what I needed. Definitely a catalyst in propelling me forward and helping me get here.

“I think sometimes when you go through the academy and then you’re a scholar, everything’s quite nice and easy and then you realise that players are playing to put food on the table, they are playing for three points and it means that much more.

“It’s an eye-opener at a young age and I’m glad I had that experience, because now I don’t take it for granted and it was a humbling experience as well, but definitely part and parcel of men’s football.”

Another influential figure in his career is Duncan Ferguson, who knew more than a thing or two about being aggressive.

Calvert-Lewin added: “Firstly, people have Duncan down for this big, angry man and he’s a nice guy when you actually get up close with him, but, in terms of on the pitch, he told me to back myself more and believe in my stature and back my strength.

“I think it’s a confidence thing – once you realise you can do it once, you start to do it more consistently and then it becomes part of your game which I think is what’s happened.”