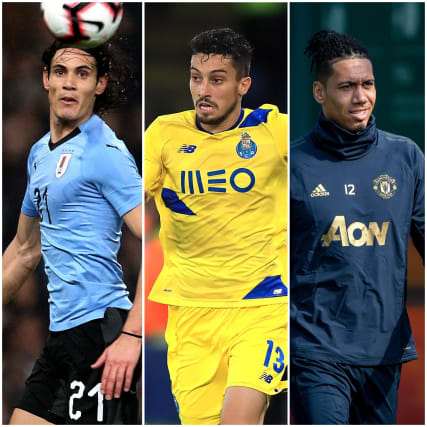 But Chris Smalling has made a permanent switch to Roma, who it is understood completed the 15 million euros (£13.6m) signing when the Italian FA processed the paperwork only a minute before the country’s transfer deadline.

United’s apparent reluctance to meet Borussia Dortmund’s £108m price tag for Jadon Sancho has seemingly led them to snap up Uruguay striker Cavani on a free transfer following his release by Paris St Germain earlier in the summer.

The 33-year-old, who has signed a 12-month deal with the option to extend for a further year, has scored 341 goals in 556 matches since moving to Europe in 2007 for Palermo, Napoli and PSG, where he won six league titles.

Cavani is the most prolific striker in PSG history with 200 goals and one of his first games could be against his former employers after United were drawn in the same Champions League group as the French giants.

He said on United’s website: “Manchester United is one of the greatest clubs in the world, so it is a real honour to be here. I’ve worked really hard during the time off and I feel eager to compete and represent this incredible club.

“I look forward to continuing to write my little story inside the book of football and I know that’s why my focus has to remain the same as always – work, work, work. I have had a conversation with the manager and this has increased my desire to wear this beautiful shirt.”

Cavani, who has scored 50 times for Uruguay in 116 appearances, has not played since March but United manager Ole Gunnar Solskjaer is convinced of his new signing’s enduring quality.

Solskjaer said: “Edinson is an experienced, ultimate professional who always gives everything for his team. His goalscoring record for club and country is fantastic and we are delighted to sign a player of his calibre.

“He has had a brilliant career so far, winning trophies at almost every club he has played for, and he still has so much more to give at the highest level.

“Edinson knows exactly what it takes to succeed and we are all looking forward to seeing him make an impact at Manchester United.”

Cavani and left-back Telles, who it is understood has joined United from Porto for a fee of £13.5m plus £1.8m in potential add-ons, have completed their moves a day after United’s 6-1 thrashing at the hands of Tottenham.

Telles has signed a four-year deal that includes the option to extend for a further year.

He said: “To join a club with the prestige of Manchester United is a huge honour. You have to work hard to get to this moment in your career and now I am coming to this club, I can promise that I will give everything in my heart to be a success here.”

Either side of the Cavani and Telles announcements, United confirmed the capture of Diallo, who is set to join from Atalanta at the start of next year subject to a medical, personal terms and a work permit.

Smalling, meanwhile, leaves after 10 years and 323 appearances with United, who claimed two Premier League titles, one FA Cup and a Europa League crown during his time at Old Trafford.

He impressed while spending last season on loan at Roma and has now made a permanent return to the Italian capital, where he has put pen to paper on a three-year contract that runs until 30 June 2023.

“Nothing in life worth having comes easy,” Smalling said on Roma’s website. “My head and my heart has always been in Rome. I am delighted to now be yours.”

PA understands the fee for the 16-year-old, who has captained France’s Under-17s, could rise to four million euros (£3.6m) with add-ons. He will immediately link up with Neil Ryan’s Under-18s squad.

Romero has been David De Gea’s understudy for the last five seasons but seems to have fallen down the pecking order behind Dean Henderson, who has started in United’s two Carabao Cup matches this season following his return to the club from two years on loan at Sheffield United.

Everton and Aston Villa have been linked with a move for the Argentina international who started the 2014 World Cup final, but an apparent reluctance to sell drew the ire of Eliana Guercio.

She wrote: “Sergio Romero worked hard for his club. Last trophy they won, they lifted it with him. He helped the team reach 4 finals/semi-finals and then he was left on the bench only to lose them all.

“It is time for them to return the opportunity and let him go. RESPECT FOR ONCE!!!!