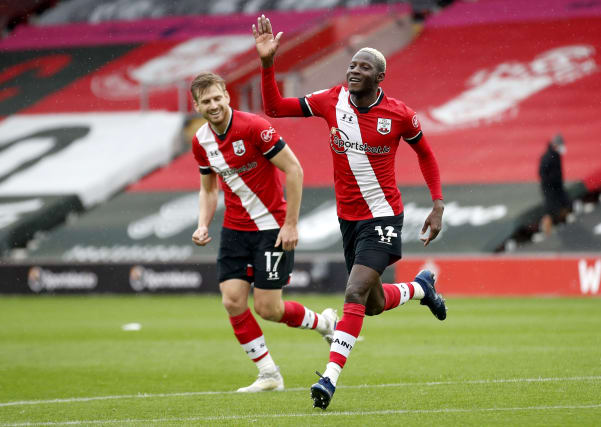 Southampton secured their second Premier League win of the season with a hard-fought 2-0 victory over West Brom at St Mary’s.

West Brom goalkeeper Sam Johnstone had made three diving saves before Moussa Djenepo put Southampton ahead on the brink of half-time in difficult conditions.

Oriol Romeu then volleyed the ball into the back of the net in the second half to double the home side’s advantage and seal all three points for Saints.

Southampton manager Ralph Hasenhuttl had said before the game he wanted his side to concentrate and be clinical for the full 90 minutes and they delivered, despite Johnstone’s efforts between the posts.

West Brom had put their first point on the board since promotion last weekend after a 3-3 draw against Chelsea – a match in which they led 3-0 at half-time – but they struggled to create chances and challenge home keeper Alex McCarthy.

Ryan Bertrand forced Johnstone into a save inside the first four minutes. The ball was played across to the former Chelsea man, who found himself unmarked on the left side of the box, and the goalkeeper came off his line to make the save.

Southampton came close for a second time in the 15th minute, only to be denied again by Johnstone who made a double save, first from a deflection off a West Brom defender and then with an outstretched leg to divert Che Adams’ follow-up strike over the bar.

The home side were on top in the early stages but often struggled to turn their prolonged periods of possession into clear-cut chances, with the Baggies defence quick to turn away balls into the box.

Johnstone was called into action again inside the opening half an hour, with a diving one-handed stop to turn Danny Ings’ goal-bound header behind for a corner.

Just before the stroke of half-time, however, Southampton made the breakthrough.

Ings’ shot was blocked but the ball fell to Djenepo, who misled the defenders before firing past Johnstone and into the bottom corner.

West Brom had a penalty shout at the start of the second half when the ball appeared to hit Bertrand as it went across the box, but the match continued without a VAR review.

Just as West Brom looked to be gaining a foothold in the game, Southampton doubled their lead, with the ball looping to Romeu who sent a powerful volley past the goalkeeper for his first Saints goal since February 2019.