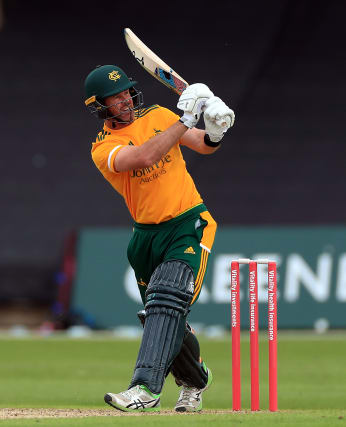 The veteran Australian, one of T20 cricket’s most decorated campaigners, pounded the Red Rose all-rounder into the leg-side mercilessly to turn a tense-looking finish into a cake walk.

Lancashire spinner Matt Parkinson and Tom Hartley had just combined to take three wickets in 10 balls, leaving Christian to face up at 66 for four needing 29 off the last four overs.

The eventual margin of victory, by five wickets and with 16 balls of the truncated 11-over allocation, represented a crushing result.

Four clean swings of the bat off Livingstone’s inviting leg-breaks essentially ended the intrigue, with Imad Wasim hitting the winning boundary immediately after Christian was stumped off Parkinson for 30.

Lancashire had posted 94 for four in the first innings, starting brightly with 32 for one in the 20-ball powerplay.

After Alex Davies departed, Livingstone and Steven Croft hit out in a productive stand of 43 in 27 balls.

Imad’s hard-to-pick left-arm spin cost a modest 20 in three overs, despite bowling eight deliveries with fielding restrictions in place, but Croft took Samit Patel for six and four, before both he and Livingstone launched Matt Carter over the midwicket ropes.

Carter got revenge on Livingstone (22) when he fell a yard short attempting another big swipe and picked up Dane Vilas for just five, reverse-sweeping his way to an lbw decision.

Croft (33) was shaping up as the key man but was out-thought by Jake Ball, who combined a wide angle and a full length and persuaded the number three to shovel a catch towards long-on. That was his 17th wicket of the campaign, taking him top of the tournament’s bowling charts.

Keaton Jennings and Rob Jones nicked another 16 runs but were unable to find the boundary that would have nudged the target to three figures.

With Chris Nash injured in the field, Ben Duckett joined Alex Hales to open for Nottinghamshire and the pair made a rapid start, piling on a quickfire 30 including an early six for each.

Duckett was well caught in the deep by Croft in the midst of a costly first over from Saqib Mahmood, but Joe Clarke’s arrival was no less concerning for Lancashire as he flat-batted his first ball back down the ground for six more.

Hales continued to go hard, hoisting Livingstone for six and four into the on-side as the score ticked to 50 in the first ball of the fifth over. The game was disappearing until the Red Rose picked up three wickets in the space of 10 balls.

Parkinson cleaned up Hales for 29 as he tossed one full and found some turn, before Hartley removed Tom Moores and the in-form Clarke (17) to ramp up the pressure.

At 66 for four and needing 29 from the last four, Christian took matters into his own hands by sizing up the leg-side ropes and pumping Livingstone over the top off his second, third, fourth and fifth deliveries.

Parkinson stopped him hitting the winning runs, Davies with the stumping as he charged, but he had already made the decisive move.