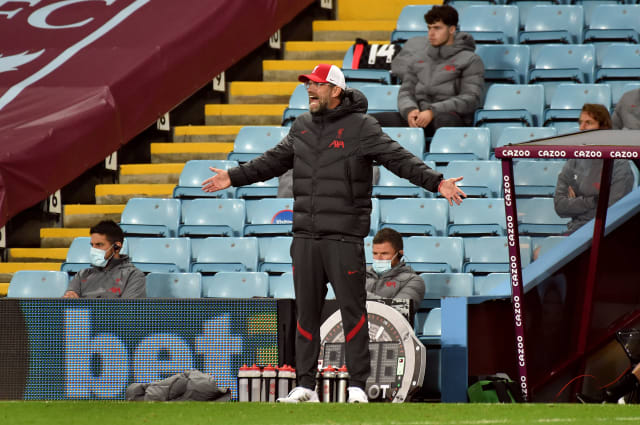 Rarely have champions been brought crashing back to earth as heavily as Liverpool on Sunday. The side that powered to the title in record time last season suffered their most chastening defeat in years as they were thrashed 7-2 at Aston Villa. The absences of Alisson Becker and Sadio Mane hardly excused a performance so limp that Villa looked like scoring with every attack. After looking untouchable last season, the Reds now look far from that. Their aura has been shattered and plenty of rivals will take encouragement.

Storm clouds seem to have been gathering around Manchester United since their disappointing exit from the Europa League in August, with a growing number of fans criticising their perceived lack of activity in the transfer market. Anyone who thought they may have been exaggerating their problems may now have to rethink after Ole Gunnar Solskjaer’s side were torn apart by Tottenham on Sunday. United were woeful as they were thrashed 6-1 by Jose Mourinho’s Spurs and it will be interesting to see if the harrowing nature of the result prompts any increased spending before Monday’s transfer deadline.

Pep Guardiola’s Manchester City have surprisingly dropped five points in their opening three games and, although there is plenty of time to turn things around, Saturday’s draw at Leeds did highlight further deficiencies in their squad. Notably, with no specialist back-up to Sergio Aguero and Gabriel Jesus, City have lacked a cutting edge. Benjamin Mendy also had a disappointing game at left-back. With a lack of serious competition for his place, the Frenchman is inconsistent. After spending more than £120million in this window, Guardiola said last week the signings were probably over – but he did not rule further additions out completely.

After a bit of chopping and changing in the early games of the campaign, Chelsea showed signs in their 4-0 win over Crystal Palace that their back line was coming together. Ben Chilwell was both solid at left-back and, in scoring a goal and laying on an assist, an attacking threat on his Premier League debut. Kurt Zouma also got on the scoresheet and his partnership at the back with the experienced Thiago Silva looked promising. With Edouard Mendy getting a chance in goal ahead of Kepa Arrizabalaga, there is a new look at the back.

Liverpool had high hopes for Rhian Brewster as he came through their junior ranks but the 20-year-old striker was clearly set for a long wait for a chance at Anfield. His move to Sheffield United looks likely to yield immediate first-team opportunities – and the Blades could do with him hitting the ground running. Chris Wilder’s side have struggled since last season’s impressive showing, losing their first four matches. Were it not for David McGoldrick’s late consolation against Arsenal on Sunday, they would not have scored a goal either.