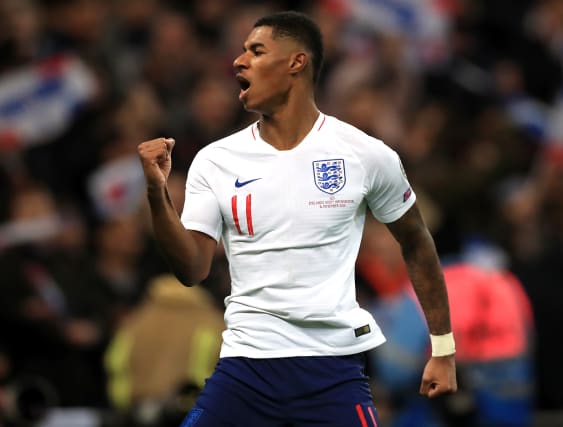 Wales boss Ryan Giggs says Marcus Rashford has the determination to “be the best” as the former Manchester United coach prepares to stop the England forward this week.

Giggs was Louis Van Gaal’s assistant at Old Trafford when Rashford broke through at United in sensational style.

The then-18-year-old Rashford scored twice on his first-team debut in a Europa League tie in February 2016, and the Manchester-born striker has gone on to become a regular starter for club and country.

“Marcus is a talent,” Giggs said ahead of their Wembley reunion on Thursday. “Having worked with him I’ve seen what a fantastic mentality he has.

“He’s a player who wants to improve and be the best. He realises he’ll need to improve like all young players.

“He’s one of a number of England players we’ll have to look out for in their forward line if they’re playing.”

Rashford took time to find his form post-lockdown after a back operation in January.

But the 22-year-old has looked back to his best at the start of the new season, opening his Premier League account with a brilliant solo goal in United’s 3-2 win at Brighton last weekend.

“Obviously as a United fan it was great,” Giggs said.

“When a player like that scores a goal like that, no matter who it is, it’s great and what fans want to see.

“If he’s in that kind of form you’ve got your work cut out to try and stop him.

“We know we’ll have to be at our best and on our toes to stop Marcus and the other players England have.”

Giggs takes a Wales team to Wembley for a pre-Nations League friendly having captained England Schoolboys there when he was known as Ryan Wilson.

Cardiff-born Giggs went to school in Salford but was never eligible to represent the senior England team. He went on to win 64 caps for Wales.

“It was a different Wembley when I went there (for England Schoolboys),” he said.

“It won’t be strange, I think it will be exciting. I’m excited to take a Welsh team to Wembley and play against a very good team, and hopefully we’ll get a positive result.”

Wales are without captain Gareth Bale, who has remained at Tottenham to build up his fitness following his loan move from Real Madrid.

Bale suffered a knee injury on international duty last month, but Giggs hopes Aaron Ramsey comes through Juventus’ Sunday fixture for the midfielder to start a Wales game for only the second time in nearly two years.

Former captain Ashley Williams, now 36 and without a club after leaving Bristol City at the end of last season, has not been included in the 27-man squad.

“The door is still open for Ash,” Giggs said. “It doesn’t matter with the age of a player whether it’s young or old.

“If they’re playing well and they still want to play for Wales, which Ash does, then there is no reason to close the door.”