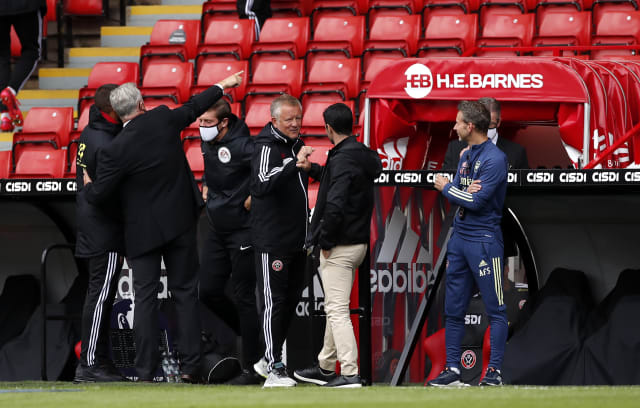 Arsenal manager Mikel Arteta has revealed he was analysing Chris Wilder’s Sheffield United side even before they made it back to the Premier League.

The Blades visit the Emirates Stadium on Sunday having struggled in the opening weeks of the new season, losing all three league games so far.

It is in stark contrast to last year, their first campaign back in the top-flight since 2007, when they shocked plenty of onlookers on their way to a ninth-placed finish.

Arteta was in charge for a 1-1 draw at the Emirates and also a 2-1 FA Cup quarter-final win at Bramall Lane en route to lifting the trophy in August.

The Spaniard has long-been impressed by Wilder and was studying his approach back when United were still a Sky Bet Championship side.

Asked what he thought about the job Wilder did last season, Arteta replied: “Incredible.

“I started to analyse his team two years to understand some of the things he was doing and I think him and the coaching staff have done a really, really good job.

“Not just for the way they play because it is a very clear style, but for the culture they created around the club and this feeling that you can sense around the team and how they compete. I think it is remarkable what they have done.

“I was told by someone that we had to have a look at them.

“I always like to see different trends, different ways of playing, formations, structures, patterns and I was impressed with some of the things they were doing. It is always good to have this information.”

Arsenal welcome Wilder’s side to north London defending an unbeaten home record stretching back to February when they were knocked out of the Europa League by Olympiacos.

“We can create a fortress at the Emirates for us,” Arteta said of maintaining Arsenal’s home form.

“It’s going to be crucial for the future results at the end of the season, not just for results but as well for the performance and what we can inspire, what we can transmit at home.

“We want to play with that confidence at home where we have to be really resilient and dominate games to impose ourselves in those games.