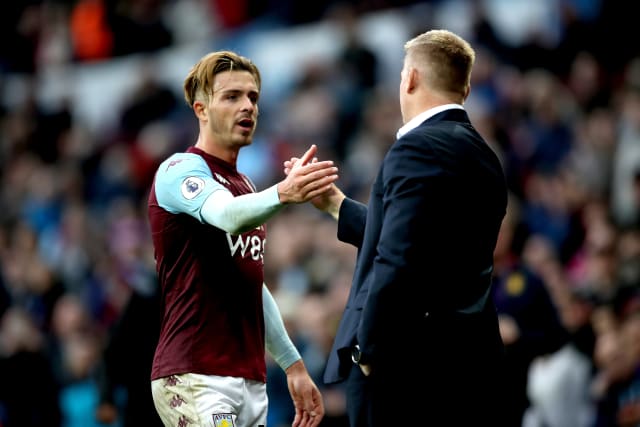 Chelsea midfielder Barkley joined on a season-long loan this week and could make his debut against Liverpool on Sunday.

Skipper Grealish inspired Villa to their final day survival act last season but Smith expects others to step up this time around.

“There’s an awful lot of potential there. I’ve spoken about taking a bit of pressure off Jack,” he said.

“The signings that we’ve made, Roscoe, Ollie, Martinez, a lot of that will take the pressure off Jack this season.

“That’s for sure. That’s got to be good for the team – a lot of people expected Jack to get a lot of the ball.

“Teams would double up on him. Obviously when you add more quality to the squad, it allows other people in the squad more time on the ball now.”

Grealish played his part in convincing Barkley to move to Villa from Stamford Bridge and Smith feels the club’s pulling power is growing after they beat the drop by a point last season.

“Jack knows Ross off the field, so he would only have said positive things about Villa to him,” said the manager.

“But it still takes something for a player at one of the top four clubs in this country to turn their head.

“Jack managed to do that, and me and JT (John Terry) were working on Ross as well.

“The signings we have made already, and Jack and Tyrone (Mings) have committed their future as well, I think that’s one of the reasons we got Ross.

“Ross has looked at it and thought ‘this is a club I can go and help drive forward and enhance my career this season by getting as many minutes as I can’. Certainly Ross having a good time with us is going to help us and him.”