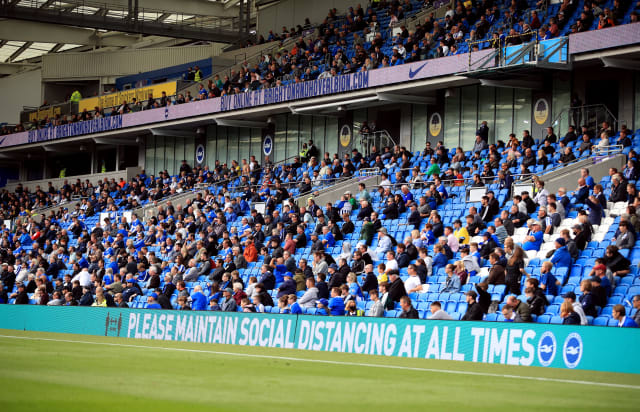 Culture Secretary Oliver Dowden is hopeful the Premier League will strike a deal with the EFL this week to help their clubs through the coronavirus crisis.

The EFL says its 72 clubs stand to lose £200million this season without crowds, having already lost £50m last season.

There are fears that without crowds some EFL clubs will disappear.

Dowden told the BBC’s Andrew Marr Show, said: “The Premier League are working closely with the EFL to see how they can support them. They are having productive conversations and I am hopeful they will reach a deal this week.

Dowden had earlier appeared on Sky News’ Sophy Ridge On Sunday show and said the Government stands ready to support EFL clubs “because they are such an important part of our local community”.

He said: “We’re all agreed the Premier League needs to step up to the plate and they’re having intensive discussions with the EFL over how they can support those clubs.

Governing bodies across a range of sports have spoken out since Prime Minister Boris Johnson announced on Tuesday that the planned reintroduction of spectators to sports venues from October 1 had been scrapped due to fears of a second wave of coronavirus infections.

The Premier League will meet on Tuesday to discuss the way forward now that the Government has effectively ruled out any fans attending matches until March.

In his Sophy Ridge on Sunday interview Mr Dowden added: “The direction is clear, we understand the Premier League needs to play its part.

“I’m in close consulation with them and I’m hopeful they will be able to reach a deal and provide that level of support.”

Asked if crowds would return by the end of the season, Dowden replied: “I would desperately love that to happen and we keep the situation under constant review.

“We are also investigating the use of new technology, working with the clubs who have done a fantastic job until now.

“If it’s all possible of course I would like it to happen, but, in this rapidly moving situation with the virus, we just need to exercise a little bit of caution which is what we’ve done in relation to October 1.

“Most people would agree against this backdrop of rapidly rising cases now is not the time to bring back crowds.”

Dale Vince, owner of Sky Bet League Two club Forest Green, criticised the Government’s decision to delay the return of spectators and said football was being treated differently to other parts of society.

“Look at walking down the high street, walking into a shop or pub or schools,” Vince said.

“Look at how those environments are controlled and then look at how football is controlled.

“We ran a pilot game last Saturday. You have a temperature check at the gate, masks are obligatory, you are oudoors and well spaced. It’s actually the safest environment to be in right now.”

Shadow culture secretary Jo Stevens said the future of lower-league clubs could only be safeguarded by the Government providing targeted support.

She said: “A one-size-fits- all approach is not working and that’s why the announcement from the Chancellor this week was so disappointing.

“This just doesn’t affect football. It affects rugby, cricket and all sorts of sports, and if we want to see these survive in six months’ time there needs to be some targeted clear support and plan now.”