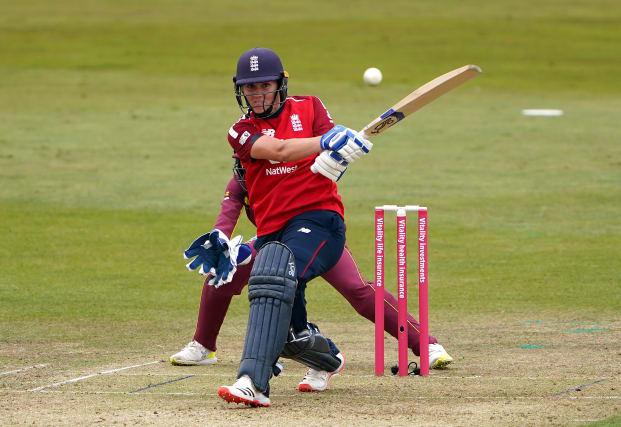 Nat Sciver hopes her starring role for England will ignite the interest of the next generation of female cricketers as a women’s international was broadcast live on free-to-air television for the first time in 27 years.

England moved into an unassailable 3-0 lead in the Vitality Twenty20 series against the West Indies thanks to a 20-run victory at Derby’s Incora Ground in a match screened simultaneously by Sky Sports and the BBC.

The BBC has shown two men’s internationals this summer, with both fixtures drawing in a peak audience of more than two million viewers, and similar figures for Saturday’s game would be a welcome boon for the women’s game.

While coverage of this five-match series has also been made available on YouTube by Sky, Sciver, who made a T20 best 82 from 61 balls, acknowledged the huge reach that terrestrial TV provides.

She joked: “Being on mainstream TV doesn’t come around that often. I’ve been waiting for the BBC to play my best!

“The amount of people that have watched the men’s games on the BBC this summer so far, the numbers are massive so I’m hoping we’ve inspired a few people to pick up a bat and a ball.”

Sciver had made scores of seven and eight in the first two T20s but a more measured approach paid off as she reined in her attacking impulses before accelerating towards the end of England’s 154 for six.

The Windies used eight bowlers as they sought to keep England’s batters from settling but Sciver shared important half-century stands with captain Heather Knight and Fran Wilson on a blustery and overcast afternoon.

Sciver then took 17 runs from the penultimate over, thrashing Windies captain Stafanie Taylor for four-six-six before being bowled attempting a ramp off Deandra Dottin in the final throes of England’s innings.

Sciver said: “The first two innings I was going a bit too big, too early which is something we are working on as a team but I think for myself to build into that is probably the best thing.

“Me and Heather came together (at 13 for two) and knew that we needed a partnership so our risk levels were a bit lower. In general that’s how we wanted to play regardless of the wickets going down in the powerplay.

“When you go in the first six, you feel like you need to get away fast and make use of the two fielders out but as long as I could run the singles well and get it out into the outfield and when I do get my chance, take advantage.”

The tourists also shuffled their batting order following heavy defeats but were once more reliant on powerful opener Dottin, who followed up her two for 29 with 63 from 56 balls.

But there was no one to take the pressure off her shoulders and when Taylor arrived to the crease after moving down from three to six, the Windies needed 64 from 35 balls and the pressure eventually told.

When Dottin holed out, the game was all but decided and although there were a couple of lusty blows from Taylor and Chinelle Henry, the Windies ended their innings on 134 for five.

“When we play we want to keep our standards high, no matter who we’re playing and make sure we’re practising to play against the best side in the world.

“It was important to make sure we did the right things and got over the line. It was good because as a bowling unit, we were under pressure a bit more, they came out with a different order and Deandra scored some runs again.

“We were pleased to be under the pump with the ball a little bit but come through in the end.”

Meanwhile, Lauren Winfield-Hill has left the bio-secure bubble to join up with the Northern Diamonds ahead of Sunday’s Rachael Heyhoe Flint Trophy final.