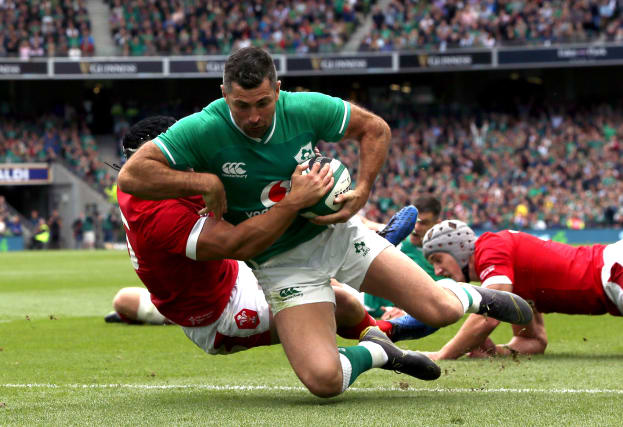 Ireland’s most-decorated rugby player Rob Kearney admits he has “lived the dream” of every young child after calling time on his distinguished career.

Full-back Kearney, 34, was part of two British and Irish Lions tours, including the 2013 series success in Australia, and won four Six Nations titles with his country, including Grand Slams in 2009 and 2018.

The 2012 European Player of the Year lifted the European Rugby Champions Cup four times with Leinster, as well six PRO14 titles and the European Challenge Cup.

A veteran of three World Cups, his retirement was confirmed by his province’s 25-17 Champions Cup quarter-final defeat to Saracens last Saturday.

“I am so very grateful for every run out that I did get in a Leinster and an Ireland jersey,” wrote Kearney, in an open letter posted on Leinster’s website.

“Losing to Saracens brought my time in a Leinster jersey and by extension an Irish jersey to an end.

“I spoke to the players in the dressing room after the game and I spoke about living a dream because that is what I have done.

“I have lived the dream of every five-year-old boy or girl out there that dreams of pulling on a Leinster jersey, an Ireland jersey, a Lions jersey.

“I consider myself very fortunate to have done the greatest thing that I could have done with my life.”

Kearney played 95 times for Ireland from 2007 until last year’s World Cup in Japan.

His 219th and final cap for Leinster came against Ulster last month, almost 15 years to the day since his debut against Ospreys in 2005.

He singled out the “sea of green” in Chicago during Ireland’s historic first win over New Zealand in 2016 and the 2018 Grand Slam-clinching victory over England at Twickenham as everlasting memories.

“The Leinster and Ireland supporters’ role in this journey has been special and running out in front of full stadia is what gives the greatest buzz and we have all missed that over the last few months and you appreciate it all the more now playing in empty arenas,” he wrote.

“You (Leinster supporters) all felt the same as us: that this club could become a mainstay of European rugby, a firepower to be reckoned with and you’ve stayed with us for every step since.

“For Ireland, the sea of green in Chicago and in Twickenham on St Patrick’s Day for our Grand Slam decider are images that will be ingrained in me for life.”