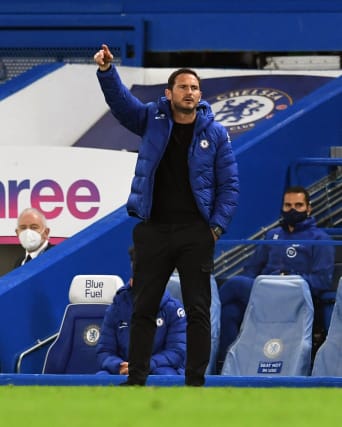 Frank Lampard has played down Toni Rudiger’s Chelsea omission despite the Germany defender eyeing a loan move away from Stamford Bridge.

Chelsea thumped Barnsley 6-0 in the Carabao Cup third round in west London, with Kai Havertz bagging a fine hat-trick.

Rudiger was omitted for his second Chelsea match in a row, with the 27-year-old understood to be open to leaving the Blues.

Thiago Silva starred on his Chelsea debut and Fikayo Tomori stood up well again, but Lampard insisted it is too soon to judge who could leave the club just three games into the season.

“That he (Rudiger) was not in the squad, that’s just a choice at the moment; with the centre-halves I have I can’t have them all in the squad,” said Lampard.

“Yes, there may be movement in the squad, we know that, but nothing is concrete so don’t read too much into those selections at the minute.

“It will have to be things that are right for the club, the individual and me, in terms of what happens in the next couple of weeks.”

Rennes goalkeeper Edouard Mendy’s £20million move to Chelsea should be confirmed imminently, with Lampard still hoping to have him available for the weekend’s Premier League trip to West Brom.

“With Mendy, the medical, I think it’s done, but I want to be a bit careful and don’t want to give absolute confirmation until I see him, possibly over the next 24 hours,” said Lampard.

“But it seems like it’s on the verge of being done.”

Tammy Abraham, Ross Barkley and Olivier Giroud all found the net to add to Havertz’s hat-trick, with the £70million Germany playmaker thriving in the number 10 role for his treble.

Brazil defender Silva and England left-back Ben Chilwell made pleasing debuts on a comfortable night for the Blues, with Lampard impressed with Havertz’s return.

“I’m delighted with Kai, it was everything I wanted the night to be for him,” said Lampard.

“Because Kai has had no pre-season, and signing for the club took a few days out for him as well.

“Tonight was a great exercise for him to see how we want to work off the ball, for him to be a part of that.

“He made a great recovery tackle for Ross’ goal. And then to also just have some freedom on the ball and roam in more central areas.

“I thought it was a great combination with Tammy, and I was pleased with the way he grew into the game in terms of confidence. It was a great night for Kai, and the first of many for him.”

Barnsley created a clutch of fine chances in the first 20 minutes but failed to convert any, and then slipped off the pace.

Boss Gerhard Struber admitted the Championship men must sharpen up their finishing.

“We found good moments in the first half, we had very good pressing and especially we had 20 minutes completely in our hands but we couldn’t convert any chances,” said Struber.

“This is the biggest issue for us at the moment. We’re not taking our chances, but when we can do that the games will go in a different direction.

“We helped Chelsea with three goals through mistakes, and after that it was difficult. We didn’t have the right intensity and aggression in the second half, so Chelsea were able to play without pressure.”

Mark Cavendish secures 2021 contract with move back to Deceuninck-QuickStep