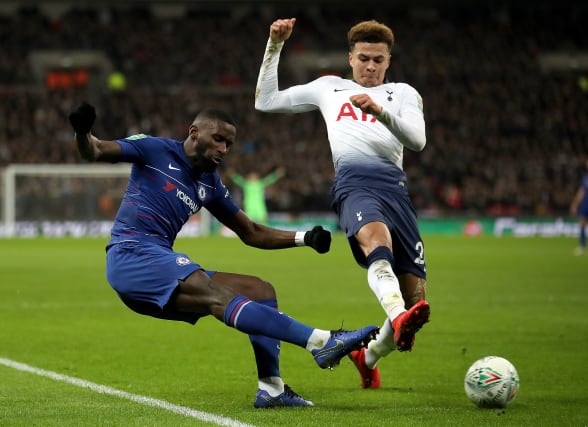 Rumours of a possible move to Paris St Germain for Dele Alli gathered pace after the England midfielder was left out of Tottenham’s squad that beat Southampton on Sunday, the Daily Mail says. Team-mates were stunned to see the 24-year-old left out, and with the arrival of Gareth Bale back at the club, talk of an Alli move to PSG has intensified, while Inter Milan have also been mentioned.

Antonio Rudiger is another player whose future has been clouded after being left out of a squad on the weekend, according to the Daily Mail. The Chelsea defender did not figure in Chelsea’s loss to Liverpool, after being an unused substitute in his side’s win over Brighton last week. The Mail says Rudiger, 27, is likely to be the subject of intense interest from some of Europe’s biggest clubs, with Frank Lampard looking to trim his squad after a big-spending summer.

Arsenal centre-back Shkodran Mustafi has been linked to Serie A sides Lazio and Napoli, The Sun reports, citing Calciomercato. The 28-year-old Germany man has a year left on his contract but the Gunners are open to offers, the paper says. Mustafi, 28, is rated around the £13.4million mark.

Fulham have made a bid for Sassuolo defender Marlon, according to Sky Sports Italia. The newly promoted London club is said to have offered around £15m for the 25-year-old as Scott Parker seeks to bolster his defences.

Crystal Palace hold the front-running in the battle to sign 20-year-old Liverpool striker Rhian Brewster, according to the Daily Mail. Sheffield United and West Brom are also in the hunt for the England under-21 international. The £20m-rated forward is wanted by Palace and the Blades on a permanent transfer, while the Baggies are interested in a loan deal.

Alex Oxlade-Chamberlain: The 27-year-old midfielder has been linked to Wolves, but Liverpool say he is going nowhere, according to the Daily Mirror.

Kim Min-jae: The 23-year-old South Korea and Beijing Guoan defender is a target for Leicester and Tottenham, website 90min says.

Alex Telles: The 27-year-old defender insists he is focused on playing for Porto, despite being linked to Manchester United, Sport TV reports.