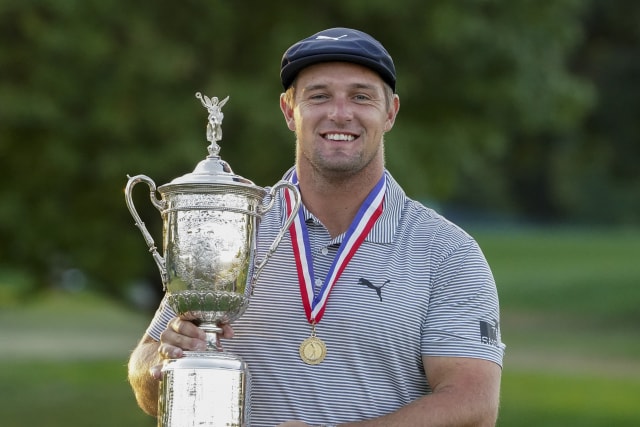 Six weeks after describing his first top 10 in a major as “super-validating”, Bryson DeChambeau delivered the ultimate proof of his methods with a resounding victory in the 120th US Open.

DeChambeau carded a closing 67 to finish six under par at Winged Foot, a record winning score by two shots at a revered venue where only two players had finished in red figures in five previous US Opens.

The 27-year-old was the only player to break par on a demanding final day and the only one not to shoot over par in any round.

He finished six shots clear of compatriot Matthew Wolff, who began the day with a two-stroke advantage but faded to a closing 75.

Former Open champion Louis Oosthuizen was two shots further back in third, with Harris English recovering from losing a ball from his opening shot of the day to finish another stroke back in fourth.

DeChambeau’s physical transformation has been the main talking point since golf’s return to action following the coronavirus shutdown, the American putting on 20lbs of muscle to become one of the game’s biggest hitters.

Rory McIlroy echoes the sentiments of many.

With Wolff much closer, DeChambeau holed from 35 feet for a crucial eagle on the par-five ninth.

DeChambeau was the only player in the field to break par on the final day.

DeChambeau’s six-shot win places him in some elite company.

For the fourth day in a row, the par-five ninth was the easiest hole, playing to an average of 4.508 and yielding four eagles and 26 birdies.

The par-four first hole played to a higher average than the ninth, 15 bogeys and 10 double bogeys contributing to an average of 4.557.

Respect for the USGA’s slow-play policy after the final pair took almost four and a half hours to complete the final round without facing any threat of sanction.