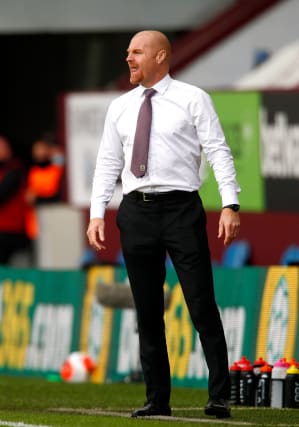 Sean Dyche says Burnley will travel to Leicester on Sunday in a confident mood despite the challenges they currently face.

The Clarets are without Ben Mee, Jack Cork, Ashley Barnes and Johann Berg Gudmundsson due to injury for what is their Premier League campaign-opener, and James Tarkowski has been having a toe problem assessed.

The squad lost the likes of Jeff Hendrick, Aaron Lennon and Joe Hart earlier in the summer as their contracts expired, Ben Gibson has joined Norwich on loan, and the only senior signing brought in so far since the end of 2019-20 is goalkeeper Will Norris.

Burnley’s first game of the 2020-21 season saw them beat Sheffield United 5-4 on penalties in the Carabao Cup second round on Thursday following a 1-1 draw. They finished 10th in the top flight last season, losing just two of their final 16 league fixtures.

Boss Dyche said: “I think when you get good results and performances it just enhances the confidence and belief in what you do, and I think that is intact.

“I enjoyed that side of it (on Thursday night) – with the changes we made, sometimes that can bring an oddness to the performance, but I thought it was a very thorough performance.

“So even with the challenges we have got in the squad, with injuries, we go to Leicester I think with a confident group.”

He added: “We plan on winning down there. We want that winning mentality, it’s not an easy thing, especially going to these clubs, but that is our expectation – to go in there with a winning thought, and I think we do that well.”

Brendan Rodgers’ Leicester ended up missing out on Champions League qualification last term, finishing fifth after managing only two wins in nine games after the resumption of the season in June.

The Foxes subsequently began their 2020-21 campaign with a 3-0 win at West Brom last weekend.

While Dyche expects Leicester to be eyeing the Champions League berths again this season, he says Burnley have “got to be open-minded with the group we’ve got at the moment”.

He said: “They (Leicester) had a tough finish to the season but overall they had a strong season. They are certainly a side to be reckoned with.

“Their challenge will be a different one to ours this season – they’ll probably be looking at can they go and get one of those Champions League spots after being so close last season.

“For ourselves it is a restart, and see where it takes us. We’ve got to be open-minded with the group we’ve got at the moment.”

Dyche on Friday said he felt Burnley are “a couple of players short, at least, if not more”, adding: “There’s nothing that is imminent. There are obviously ideas and thoughts, but there’s certainly nothing we can push on with at the moment.”