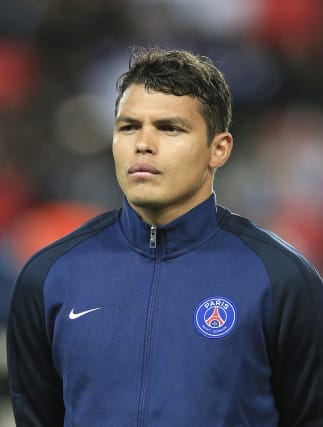 Thiago Silva is undergoing a crash course in English to help kick-start his Chelsea career.

The Brazil defender is not yet match-sharp, so will not make his Chelsea debut in Sunday’s Premier League clash with Liverpool at Stamford Bridge.

But while the 35-year-old is hard at work on Chelsea’s Cobham training pitches, the former Paris St Germain centre-back has also been hitting the books in a bid to fast-track his adjustment to life in England.

“But we have a lot of players in the squad who are multilingual and will help with that.”

Silva will turn 36 next week but Chelsea have been unfazed about his advancing years, given his vast experience and continued high levels of play.

The 89-cap Brazil defender excelled across eight years in Paris before making the switch to Chelsea, and while Silva might be battling the language barrier he is already making his presence felt.

“Thiago is certainly a leader, he brings that with him by nature,” said Lampard.

“By his presence, by his attitude in training, by the quality of player that he is, he commands respect.

“I look forward to having him around. He already seems very engaging and intent on helping the team, and that’s all you can ask for as a coach.”

The Blues could still complete a deal for Rennes goalkeeper Edouard Mendy, and West Ham’s Declan Rice has also been a long-term target.

While Chelsea eased into the new campaign with a 3-1 win at Brighton on Monday night, Lampard’s men will face a far stiffer challenge against defending Premier League champions Liverpool this weekend.

Keeping all his players happy, fit and firing will be among the top tests for Lampard this term but the former Chelsea and England midfielder – who has allowed Davide Zappacosta to leave for Genoa on loan – is under no illusions as to the challenge.

He said: “That’s the challenge for, I think, any coach in the Premier League.

“Every squad has to have, now, 20-plus players, particularly when you are fighting in all competitions, to handle the endurance test that is the season.

“Trying to find the right balance of the squad is something I think last year we were searching for a lot because we and I couldn’t make changes to bring what I felt was better balance.

“This season we hope we will move towards having a real good balance between the squad but we must give that some time because when we have brought in players now, we haven’t had a pre-season, so there is no doubt it will take time to get the team moving in the direction that I want it to.”