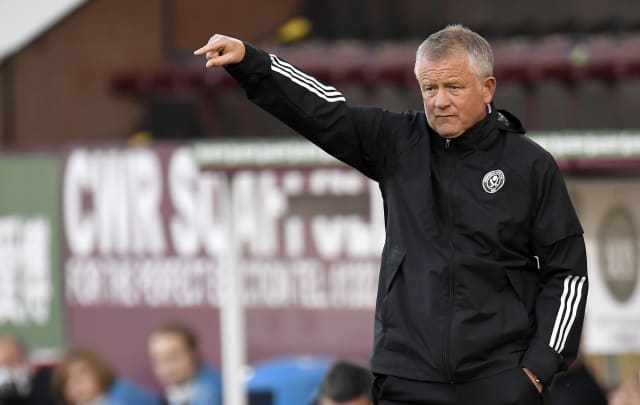 Sheffield United manager Chris Wilder admits he is still irked by the response to the controversial failure of goal-line technology during last season’s goalless draw at Aston Villa.

The Blades return to Villa Park on Monday evening, three months after a technical fault denied them a perfectly good goal when goalkeeper Orjan Nyland carried Oliver Norwood’s free-kick across the line.

Wilder feels feedback received from the Premier League and a statement from technology operator Hawk-Eye were insufficient and believes so-called bigger clubs would have received better treatment.

Asked if he was satisfied with the explanations given, he replied: “No, not at all, not at all.

“The (Hawk-Eye) statement that was made on the night – nothing really from anybody else. We got a bit of contact from the Premier League but no, not at all (satisfied).

“I’m not sat here thinking that has all been explained and everything is OK.

“I am absolutely 100 per cent certain that if we were a more powerful football club in the Premier League, a bit more of a name – we’re not as fashionable as some football clubs – I think there would have been a lot more made of that.

“But we had to move on. Most probably it will come out as, ‘manager at Sheffield United moaning’ but I am not. I am just giving you, as always, my honest feelings about that matter.

“It’s a little bit too late (for an explanation now). I am not expecting it incoming.”

Villa beat the drop on the final day of the campaign, finishing a single point above relegated sides Bournemouth and Watford.

While Wilder remains unhappy about the fallout from the incident, he accepts other clubs may have greater reason to grumble.

He is confident there will be no repeat of the mistake.

“I think a couple of other clubs might have had a little bit more of a moan towards the end of the season but there was always getting to be that possibility that it would affect people because of how tight it was down in those positions,” he said.

“Obviously, come the end of the season, it was always going to be decided by one or two points.

“I am sure that fault or that decision won’t happen again. I think it was the first time in about 9,000 games, so you will have to wait a long time for that to happen again.”

United are poised to head to the West Midlands with their pursuit of a new striker still ongoing.

Wilder has spoken to Liverpool boss Jurgen Klopp about the possibility of taking Rhian Brewster on loan, while the Blades reportedly had an approach for Arsenal forward Folarin Balogun turned down.

“We’re ready to do business. I doubt (anyone) would be in for Monday,” said Wilder.

“We’ve made an enquiry (about Brewster). I am not going to mug everybody off by saying there hasn’t been an enquiry.

“I have spoken to the manager (Klopp), the club has spoken to Liverpool. I have left that situation now for the CEO and I will get my answers off him regarding Rhian and other targets as well.

“We are looking in that position. We’ve got a list of players, like everybody else. We have to be open-minded about it and that’s what we are being.”