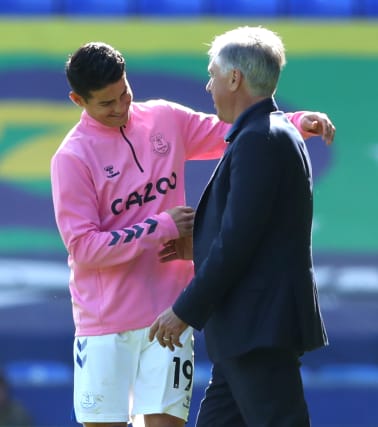 Everton manager Carlo Ancelotti hailed the quality of James Rodriguez after his high-profile summer signing played a key role in the 5-2 win over 10-man West Brom.

The Colombia international scored his first goal – and the crucial one in Ancelotti’s opinion – in English football and played a big role in most of their best football as Dominic Calvert-Lewin scored a hat-trick to take his tally to four for the season.

But it was Rodriguez who caught the eye on his home debut.

“He scored his first goal in the Premier League, this is the most important part,” said Ancelotti.

“He is comfortable with the team and everything is OK. In this moment he is using his quality.

“The quality of James makes him play easy. His football is not so complicated because when he gets space he likes to use his quality on passes and when he has no space and is under pressure he tries to play simple.