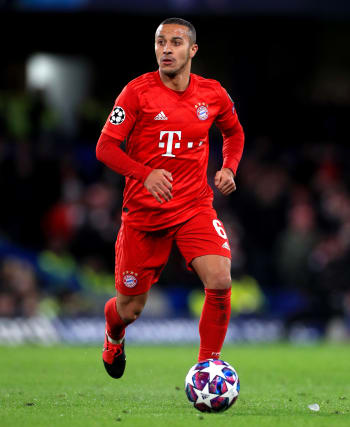 Midfielder Thiago Alcantara admits he has been waiting a long time for his move to Liverpool.

The 29-year-old has signed a four-year deal at Anfield after completing an initial £20million transfer from Bayern Munich, where he was in the final year of his contract.

Manager Jurgen Klopp has been a long-time admirer of the Spain international, who leapt at the chance to move to Liverpool.

“I think it’s an amazing feeling,” he told liverpoolfc.com. I was waiting for this moment for a long time and I am very, very happy to be here.

“When the years are passing, you are trying to win as much as you can – and when you win, you want to win more.

“I think this club describes what I am as well; I want to achieve all of the goals, win as many trophies as possible.

“It also (has) this kind of family (feeling) that I need because we (like to) have a very close relationship with the club and I think I will feel this, I will have this feeling, with this club as well.”

Thiago’s signing has been anticipated by supporters for some time, even though initial indications were that Liverpool could not afford the reported £30million asking price.

However, a cut-price deal has been struck, which will increase with add-ons related to the progress and success the Reds have, and his arrival sent social media into meltdown.

“(The fans) are not more excited than I am, for sure not,” added the midfielder.

“It is not about saying words, it is about doing the things. I will give my heart on the field to my team-mates, the club and also to the fans.”

Klopp struggled to conceal news of the impending announcement at his midday pre-match press conference.

But he is delighted by the “exceptional” deal.

Klopp said: “It’s very exceptional because in our situation, a lot of people around us talk constantly – ‘What are you doing? – bam, bam, bam’.

“Then preparing something like this, working on all different things you have to work in a transfer like this – with thinking about a player like him already is a joy, to be honest, because it gives us obviously some options.

“I know all the people at Bayern wanted to keep him desperately, that’s normal and understandable because he played an important role, in the last season as well.

“He just was ready for a new challenge and he decided for us.

“It is about the club, it’s about the team, that he wanted to join us. That’s really cool.

“But did I think about him earlier? I thought a lot about him but never as a potential transfer, to be honest.”

Earlier in the day Thiago had bid an emotional farewell to Bayern, saying he wanted a “new challenge”.

“I have made the most difficult decision of my sports career,” he said in a video posted on Twitter.

“I will close this chapter on this wonderful club where I have grown as a player for seven years. Triumphs, joy and also hard times.

“But what I am most proud of is that I arrived in Munich as a young man filled with dreams and now I will leave completely fulfilled with a club, a history and a culture.

“My decision is purely of a sporting nature. As a soccer player I want new challenges to develop myself further.”

Liverpool’s summer spending may not be over yet as the PA news agency understands they have an interest in Wolves forward Diogo Jota.