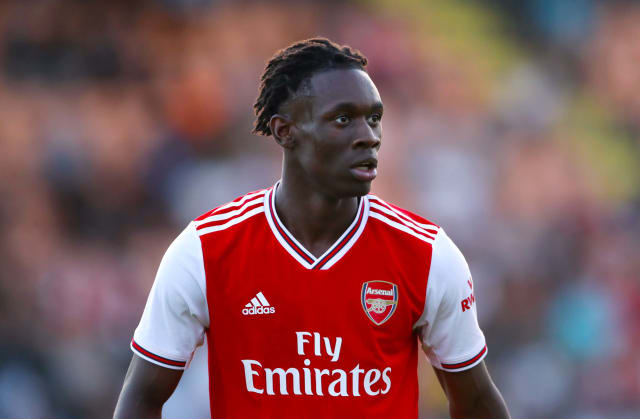 Wilder is keen to add another forward to the signings he has already made since the end of the 2019/20 season and Liverpool’s Rhian Brewster has been a target.

On Tuesday it was reported the Bramall Lane outfit had had a bid for 19-year-old Balogun rejected.

And ahead of Thursday’s Carabao Cup second-road tie at Burnley, Wilder said: “We made an enquiry regarding the young man at Arsenal.

“That is left with the CEO at our football club and at Arsenal. The last one that we’ve talked about, at the top of the pitch, we want attributes that suit us and hopefully move us forward.”

The news comes with Wilder having a forward unavailable in Lys Mousset, whom he says will be out “for a little while”.

The Frenchman sat out Monday’s 2-0 Premier League loss to Wolves after suffering a foot injury during a pre-season friendly, and Wilder said: “At the time it just looked like someone had just trodden on his toe, but looking at it and rewinding it, it was a little bit more sinister than it first looked.

“The boy had all his weight on Lys’ foot and damaged the ligament underneath, quite an unusual injury. After scanning, it was decided to have a minor operation.”

He added: “We need to add at the top of the pitch. We have a decent selection of players, but we want to add another one, especially with Lys missing for a little while.”

A number of new signings are set to make their debuts in Thursday’s contest, including Jayden Bogle, Max Lowe, Ethan Ampadu and Oliver Burke.

Forward Burke has joined from West Brom, with Callum Robinson going in the opposite direction.

Wilder said the club have to help the likes of Burke realise their potential, given they are unable to afford the kind of money it would take to bring players like Bournemouth’s former Blade David Brooks back to the club.

“I’d love to bring David Brooks back to this football club, why wouldn’t I, if he was available? With due respect to Bournemouth and (their boss) Jason Tindall, and maybe I’m wrong in speaking about David, but we’d love to have kept him or bring him back, a match-winner.

“We have to take chances on players, and Oli (Burke) knows that. Oli has point to prove, and we have to go down this road. We can’t go and get somebody for that sort of money.”

Nottingham Forest academy product Burke, 23, joined West Brom from RB Leipzig for £15m in 2017 and has spent time in the last two seasons on loan at Celtic and Alaves.

The Scotland international said of his move to Sheffield United: “It’s a massive opportunity for me.

“I’ve had many ups and downs in my career and hopefully this is the time for me to get myself back on the right path and to start establishing myself a little bit more.”