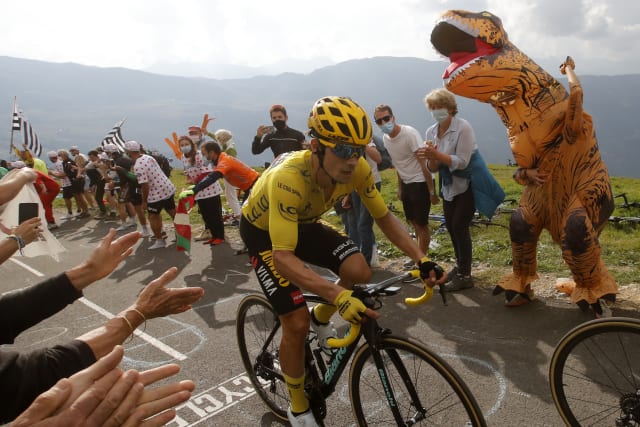 Primoz Roglic strengthened his grip on the yellow jersey as Miguel Angel Lopez won stage 17 of the Tour de France on the imposing slopes of the Col de la Loze above Meribel.

The rider known as ‘Superman’ took off for victory as the gradients at the top of the 21-kilometre climb hit 24 per cent, riding away from the other contenders for a stage win that moves him up to third overall.

Behind, all eyes were on the Slovenian duo battling for yellow, with Roglic coming over the line 15 seconds behind Lopez but crucially 15 seconds ahead of compatriot Tadej Pogacar, who saw his deficit in second place grow to 57 seconds with bonuses applied.

Lopez now sits third, one minute and 26 seconds down, after Rigoberto Uran faded late on and dropped to sixth overall.

“I’m really happy and very emotional,” Astana’s Lopez said. “We worked really hard for this and it wasn’t easy to get there. I’m emotional.”

It was an almost inhumane way to end the queen stage of the Tour, though riders could be grateful that forecast storms did not arrive as the newest paved climb in the Alps made an instant impact on its debut.

Legs had already been softened up by the mighty Col de la Madeleine, the first of the two summits above 2,000 metres on this 170km stage from Grenoble.

It was the sort of stage which would have suited an in-form Egan Bernal, but the day began with news that the defending champion had withdrawn from the race after shipping 18 minutes in two days as a result of a back injury.

Instead, the Ineos Grenadiers were again active in the breakaway with Richard Carapaz the final survivor of a break which had featured Julian Alaphilippe, Gorka Izagirre, Dan Martin and Tuesday’s winner Lennard Kamna when they hit the Madeleine midway through the stage.

Carapaz went alone on the final climb, briefly stretching his advantage as the contenders weighed each other up, but he was caught with three kilometres to go as the attacks began in sight of the steepest sections.

Mikel Landa’s Bahrain-McLaren team had worked hard to set the pace, but the Spaniard dropped back before Lopez struck out for glory soon after Carapaz had been passed.

Roglic remained calm, easing his way back up to Jumbo-Visma team-mate Sepp Kuss before riding away from Pogacar, with the UAE Team Emirates rider left to push away overzealous fans who outwardly ignored pleas to respect the race amid the coronavirus pandemic.

“I don’t think the job is done,” Roglic said. “There are still some hard stages to come and Tadej Pogacar is a great climber.

“It’s never enough of a gap. When you have something, you always want more. But I was happy with the position I was in before the stage, and now I’m even happier.”

Adam Yates lost time in the finale but remains in fifth place, now three minutes and 14 seconds off the yellow jersey behind Richie Porte in fourth.

“Tough day, but I hung in there as long as I could so we can be happy with that,” the Mitchelton-Scott rider said.

“We’ve got a big stage tomorrow, a lot of altitude metres, and then all we’ve got after that is the time trial, one day all by myself so we’ll keep going. Hopefully tomorrow I’ve got good legs and we’ll keep trying.”

At the start of the day, Sam Bennett kept himself glued to Peter Sagan’s wheel and was able to use the intermediate sprint to add two points to his advantage in the green jersey, which now stands at 47 points.

Pogacar led the peloton over the Madeleine and added the king of the mountain’s polka dot jersey to his best young rider’s white jersey, but his odds of upgrading to yellow before Paris lengthened by the end of the day.

“I’m happy to have two jerseys now,” said the 21-year-old. “The objective is still the general classification. If I can’t take yellow, I can take this.”