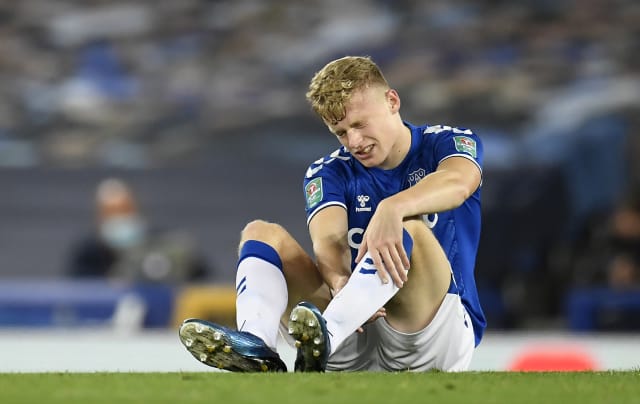 Everton made hard work of dispatching League Two Salford 3-0 in the Carabao Cup but another injury to a centre-back left manager Carlo Ancelotti with a headache.

With Mason Holgate potentially out until the end of October with a toe injury, Keane and Yerry Mina are now Ancelotti’s only two central defenders and that may force his hand in the transfer market.

The Italian was keen on a loan deal for Chelsea’s Fikayo Tomori but he is also attracting interest from Rennes and Everton’s pursuit has gone somewhat cold.

Despite Everton’s poor record in this tournament they have not failed to get beyond the second round since 2001 and despite not scoring their second until 16 minutes from time there was little danger of that record being under threat.

Five years ago to the day Salford were beating fellow Northern Premier League club Whitby Town in an FA Cup first qualifying round replay, but if the League Two side were to stand a chance of pulling off an upset they had to keep things tight.

So allowing Theo Walcott to wastefully head over from close range from the hosts’ first attack would have set alarm bells ringing.

And rightly so as just eight minutes in Keane, the only survivor from Sunday’s win over Tottenham after Ancelotti made 10 changes, headed home a Sigurdsson corner.

Midfielders Tom Davies and Bernard both had chances to extend the lead but in truth Everton failed to properly test goalkeeper Vaclav Hladky.

Striker Kean, with just two previous goals since his move from Juventus last summer, failed to take his chance on a rare start and crashing a header against the crossbar from six yards summed up not only his night but his Everton career so far and his 87th-minute penalty was something of a gift.

Niels Nkounkou, an unheralded £250,000 arrival from Marseille’s B team, did impress, however, and will provide important cover for first-choice left-back Lucas Digne, who played 65 minutes as a makeshift centre-half after Branthwaite’s injury.

Everton made heavy weather of finishing off their opponents and had to wait until the 74th minute, when Nkounkou played in Anthony Gordon, for Sigurdsson to sidefoot home his 100th goal in English football.