Lamine Diack due to receive corruption verdict on Wednesday 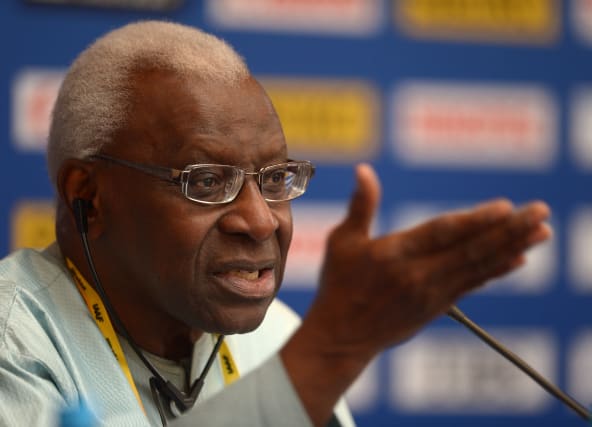 Former World Athletics president Lamine Diack will learn the outcome of the corruption case against him on Wednesday.

The 87-year-old, who was the figurehead of track and field from 1999 to 2015, faces five charges related to an alleged cover-up of drugs tests for Russian athletes in return for bribes.

The case was finally heard in June, with prosecutors calling at the end of the hearing for Diack to be given a four-year prison sentence for the alleged offences.

The decision will be issued at 12.30pm UK time.

He is charged with directly or indirectly soliciting 3.45 million euros (£3.18m) from athletes to cover up positive drug tests in order for them to continue competing in events, and with soliciting or approving the payment of 1.5m US dollars (£1.16m) from the Russian authorities to finance electoral campaigns in his native Senegal.

He is also charged with being involved in a payment of 190,000 euros (just over £175,000) to the former head of anti-doping at the governing body Gabriel Dolle, and also with complicity in money-laundering and breach of trust.

His co-accused are Dolle, his son Papa Massata Diack, his former legal counsel Habib Cisse, the former president of the Russian athletics federation Valentin Balakhnichev and Alexei Melnikov, the former head of long-distance running at the Russian federation.

The two Russians, along with Papa Massata Diack, were tried in their absence. All three are subject to international arrest warrants.

Diack senior has been under house arrest in France since November 2015.

Allegations of a conspiracy to cover up positive drugs tests first came to light when Yuliya Stepanova and her husband spoke out in March 2013.

Eleven months later Andrei Baranov, the agent of Russian marathon runner Lilya Shobukhova, told the race director of world athletics’ governing body, then known as the IAAF, said she had been asked to pay 450,000 euros over a two-year period to stay off a doping watch list in order to compete at the 2012 Olympic Games in London.

Diack stood down as IAAF president in August 2015, with Lord Coe succeeding him in the top job.

In January 2016 the World Anti-Doping Agency found Diack “organised and enabled” the Russian doping scandal within the IAAF. The IAAF issued life bans from the sport to Diack Jr, Balakhnichev and Melnikov.

A lawyer for World Athletics told the court in June that the organisation was seeking 41.2m euros (just under £38m) in damages over the alleged conspiracy.