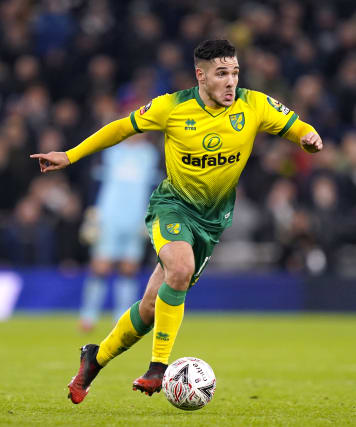 In-demand Emi Buendia has revealed he wants to return to the Premier League but has vowed to continue fighting for Norwich.

The forward is eager to make a quick comeback to the top flight after the Canaries’ relegation last season.

Leeds, Crystal Palace and Aston Villa have been linked with the 23-year-old this summe,r with Norwich willing to sell the Argentinian if their valuation is met.

The Canaries are confident of keeping more of their stars than expected – despite having sold Jamal Lewis to Newcastle – but Buendia admitted the club know his desire.

He told the PA news agency: “From the first day I have been happy with the relationship with them. They understand my situation and they know my dream is to be in a Premier League team.

“I’m still here, I will fight for the team but if a very good offer for me arrives they are open. We’ll decide what’s best for everyone.

“Me and my family have loved the city since we arrived but I want to play in the best league in the world and would like to stay in a Premier League team.”

Buendia, who cost an initial £1.3million from Getafe two years ago, is settled in Norfolk with a young family and while he is flattered by speculation linking him with a move from Carrow Road it will not distract him.

“Until the day I leave the club I will fight for them. I’m thinking about playing well and helping the team. My head is here,” said Buendia, who signed a five-year deal last summer.

“I see clubs are interested in me. I love to hear that because it means Premier League teams want to get me in their team. I’m happy with that.

“I’m happy to feel the pressure and to feel important. I’ve played here for two years and I feel like an experienced player in the team. I feel important because my team-mates give me that feeling.,

“They know how I like to play, I’m feeling good within my role.”

Buendia missed Saturday’s 1-0 win at Huddersfield – which ended a run of 12 straight defeats – as he served the final game of a ban after being dismissed against Burnley last season.

He scored once in 36 Premier League games but was a regular threat and, in December, created 29 chances – the most by a player in a calendar month on record in Premier League history.

It was a level he felt comfortable at.

“We got promoted as champions and it was a really good year for me and the club,” said the former Real Madrid youth product. “Last year was exciting to be in the Premier League, it was one of my dreams. It’s the best league in the world.

“Personally, I felt good, I had a lot of games. Sometimes good – sometimes not very good – but I felt OK. I had a good start and had some good stats and numbers.”

Norwich are favourites to make an instant return to the top flight after signing striker Jordan Hugill from West Ham and Ben Gibson on loan from Burnley, promotion will trigger an £8million permanent move for the defender.

It brings a different kind of pressure with the expectation now on the Canaries, something Buendia is ready to embrace.

He said: “When we were the champions (in 2019) nobody thought we would be. This year the pressure is there, it’s good to feel that.

“Everyone thinks we can do it, we have to do it and we have to fight. This club deserves to be in the Premier League.

“We have to go game-per-game and not confuse ourselves, then we will see what happens at the end.

“This year we have some young players, new players and two experienced signings in Ben Gibson and Jordan Hugill.

“It’s difficult to know everyone in two weeks – and then after an international break – but every morning in the dressing room the spirit of the new players and how they are with everyone is really good. It’s one of the biggest things in any team.

“It was difficult two years ago but this year will be harder. We’re hunting to get everything.”