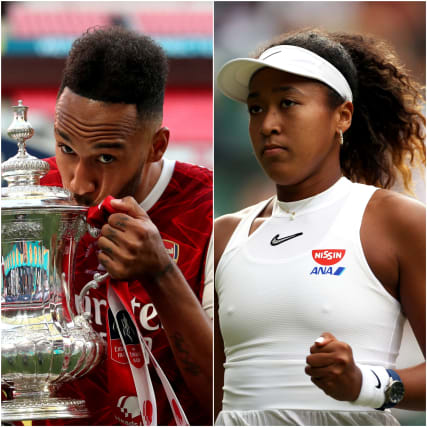 Here, the PA news agency looks at some of the best examples from September 15.

Football’s worst-kept secret was out of the bag.

But only after some more teasing.

England batsman Ollie Pope was very pleased with the news.

Will Chelsea be Premier League contenders this season?

Kai Havertz made his Blues bow following a big-money move from Bayer Leverkusen.

While fellow Englishman Jude Bellingham marked his BVB debut with a goal.

Miralem Pjanic was unveiled at the Nou Camp.

Jack Grealish was staying at home.

A win which very much pleased Joao Moutinho.

Manchester United captain Harry Maguire is keen to get their campaign underway.

Full-back Alex Greenwood was working hard with the Lionesses.

Joe Root was ready to sign off a unique summer on a high.

The Covid-19 protocols caused Lancashire’s Steven Croft a few issues in their Roses win over Yorkshire.

Dillian Whyte now has a date to seek revenge against Alexander Povetkin.

US Open champion Naomi Osaka was very excited to receive some high-level congratulations.

Genie Bouchard got the go ahead to fly.

Rafael Nadal will be back in action tomorrow night in Rome.

Which was looking a picture!

Victoria Azarenka set about putting her US Open final defeat behind her.

An honour for DJ.