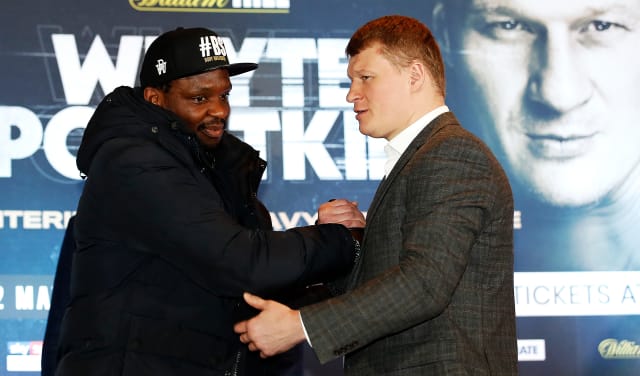 Dillian Whyte will get the chance to avenge his stunning knockout defeat to Alexander Povetkin in a rematch on November 21, Matchroom Boxing has announced.

British heavyweight Whyte’s hopes of a world-title shot were blown away by Povetkin in August when he was knocked out in the fifth round having dominated the fight.

“I’m over the moon to have the rematch,” said Whyte. “As soon as I got out of the ring, I was looking for confirmation that the fight would be on. I can’t wait to get back in the ring and get back what is rightfully mine.

“I’m looking to do what I said I would the first time, and that’s beat Alexander Povetkin.”

The first fight was staged as part of Matchroom’s Fight Camp, which was held at its headquarters in Brentwood, Essex, and the venue for Whyte-Povetkin II has yet to be confirmed.

“I’m excited to announce our latest shows as we continue to bring boxing back during these unprecedented times,” said promoter Eddie Hearn.

“It’s so important to continue the momentum and as we leave behind an epic Fight Camp series, we now hope to see fans return to arenas.

“As those talks continue with the government, we are committed to running these shows with or without fans.”

London fighter Whyte, 32, appeared to be closing in on a WBC world heavyweight title fight in their first clash when Povetkin produced an explosive left uppercut to end the fight.

“There won’t be any major adjustments, but I just need to be more switched on and not get distracted,” Whyte said.

“He was able to use his experience against me. I will be a lot more focused and sharper in the rematch. I’m coming to win and knock him out. I’m coming to even the score and the only way to do that is by knocking him out.”

“As I said before the first fight, and after it too, Dillian Whyte is a good, strong boxer,” Povetkin said.

“I will be ready to enter the ring on November 21. I hope it will be another beautiful fight for the fans.”