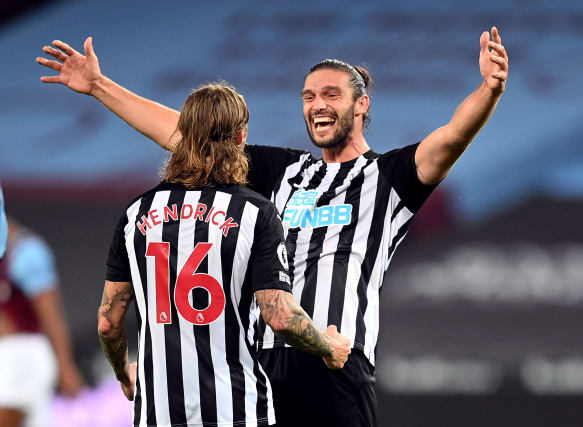 Steve Bruce has told striker Andy Carroll to keep doing what he does best despite finding himself on the wrong side of referee Stuart Attwell.

The 31-year-old striker threw himself into the task of leading the line for the Magpies in their 2-0 Premier League win at West Ham on Saturday in characteristically physical style, but to his evident frustration, was repeatedly penalised by the match official.

However Bruce, who as a former central defender knows all about that side of the game, has leapt to Carroll’s defence.

The Newcastle head coach said as he prepared to send his side into Carabao Cup second-round battle with Sky Bet Championship Blackburn on Tuesday evening: “Look, when you’re jumping for a ball then your arms go up, it’s normal.

“If you look at a high jumper, the way they try to jump, they jump and their arms are above their head, and it’s the same in football.

“Now unfortunately – as my face will tell you – if you’re going to go and head it repeatedly you’re going to get bashed around a bit. It’s normal. It’s going to happen and it will keep happening as long as heading the ball is in the rules. It’s impossible to jump with your arms by your side.

“Of course now with no supporters, we hear every bit of contact, don’t we, and every moan and groan that a player makes.

“We wanted to see Andy Carroll and there was a touch of Andy Carroll of old, wasn’t there, about him? He looked fit, he looked well, he was a physical presence and when Andy Carroll is playing like that, then we all know how good he is.”

Carroll is likely to be rested against Rovers as Bruce makes wholesale changes, one of which will see summer signing Ryan Fraser handed a debut and the chance to follow in the footsteps of fellow new arrivals Callum Wilson, Jeff Hendrick and Jamal Lewis, who all impressed at the London Stadium.

Bruce said: “He’s a bit of an old-fashioned type. He’s all pace and power – he’s electrifying with his pace and his power.

“Certainly the way he’s been in training, he’s desperate to play. He will make his debut. He wants to beat you. He gets the ball and he’s got one thing on his mind. He’s one of those.

“He’ll be a big crowd favourite, I’m sure of that.”