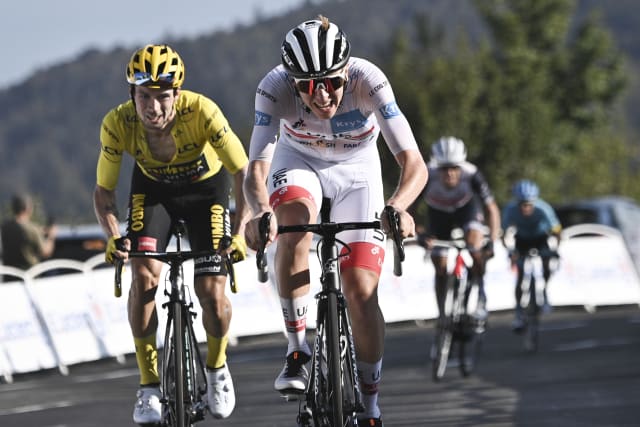 Primoz Roglic is certain a Slovenian will be stood on the top step of the Tour de France podium next weekend but stopped short of promising it would be him rather than Tadej Pogacar.

After defending champion Egan Bernal went backwards on the Grand Colombier on Sunday, ensuring there would be no repeat of the Ineos/Team Sky domination this year, Jumbo-Visma’s Roglic now leads the Tour by 40 seconds from his compatriot Pogacar of UAE Team Emirates.

There is then almost a minute to Rigoberto Uran in third, with Miguel Angel Lopez fourth and Adam Yates fifth, more than two minutes off the yellow jersey he held for four days in the opening week.

The mountain stages up until now point to a two-way fight for yellow, with Roglic and Pogacar having won three stages between them and dominated the battle of the overall contenders.

“Definitely,” Roglic said when asked if a Slovenian would win. “I’m confident for that. Who it is, we will see in one week but hopefully it’s my name.”

The pair are close friends but are at different stages in their careers, with Roglic now 30 but Pogacar fresh-faced at 21.

Some have likened the friendship between them as being almost brotherly but there is a rivalry too, as shown by some of the close battles between them already in this race.

“Primoz is my friend,” Pogacar said. “We have a good relationship, but on the road we want to win every time. This is sport. Everyone wants to win. On the road we respect each other, I look up to him. He’s really strong guy, a really good rider, but if I can win I will take the opportunities.”

Pogacar did just that on the Grand Colombier on Sunday, taking four seconds back on Roglic with a late dart to the line, and both riders disspelled any notion there was an agreement between them.

“I always want to win,” Roglic said. “I was disappointed. In the final I went too early so at the end, I just missed that punch in the last 50 to 80 metres…

“But it’s not a thing that we need to gain any seconds. Still, on the other hand when you are strong and you have the opportunity you have to take it.”

A week after Tour director Christian Prudhomme was one of five individuals on the race to test positive for coronavirus, another rest day brings another round of tests and another nervous wait for results.

But Roglic had that worry removed from his shoulders early on with confirmation of a negative result, and spent Monday scouting Tuesday’s final climb to Villard de Lans.

“There are key points every day,” he said when asked about the final week ahead. “Every day some guys are going home. The main thing is to stay focused. When you are more and more tired you can easily lose concentration and stupid things happen.

“We cannot afford that, we need to really concentrate and do our jobs.”

A fascinating final battle remains, but neither rider is showing any signs of pressure.

Roglic, shepherded by a Jumbo-Visma squad that looks head and shoulders above any other squad in the race, said it was for Pogacar to attack.

Meanwhile Pogacar, with his whole career still ahead of him, is already exceeding expectations as he sports the best young rider’s white jersey

“Before the Tour I was confident in my shape, I knew I was strong,” he said.

“But to be here on the second rest day with two stages, second on GC and in the white jersey, that was a little bit hard to believe. But I am here and we will fight to the end.”