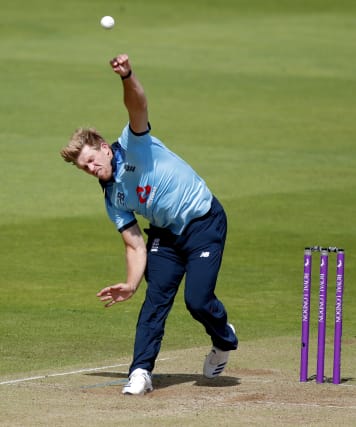 Lancashire took advantage of Yorkshire’s lack of four senior players due to a coronavirus related issue to seal a commanding six-wicket Vitality Blast win at Emerald Headingley, taking a significant step towards the quarter-finals.

The Vikings were without Matthew Fisher, Tom Kohler-Cadmore, Josh Poysden and captain David Willey, and they now have a mountain to climb to qualify for the last eight.

They actually made an excellent start, reaching 62 for one after six overs having elected to bat before stumbling to 145 for nine after 20 overs, with Matthew Parkinson and Luke Wood taking three cheap wickets apiece.

The Lightning, far from their best in the field and with the bat, then chased down the target in nervy fashion at times. They recovered from 77 for four in the ninth over as captain Dane Vilas top-scored with 44 not out off 36 balls, winning with 2.1 overs to spare.

They have consolidated second spot in the North Group with a fourth win, moving to 10 points – two behind leaders Nottinghamshire. More importantly, they are four points ahead of Yorkshire on six points in fourth.

Both teams have three games remaining, including Thursday’s return clash at Emirates Old Trafford. The top two teams from the three groups qualify for the quarters, as do the two best third-placed teams.

After a racing start, Yorkshire’s innings fell away through the middle, with leg-spinner Parkinson striking twice in his first three balls to remove Dawid Malan (27) and former England Under 19s all-rounder George Hill.

The Vikings slipped from 78 for one in the ninth over to 87 for four in the 11th, with stand-in captain Adam Lyth also falling for an innings-high 36 having been dropped twice.

Lyth and new opening partner Harry Brook (17) took 15 off each of the first two overs. Both men pulled huge sixes into the Western Terrace.

Brook was the first wicket to go in the third, brilliantly caught by a diving Tom Hartley running around from short third-man off Wood to make it 30 for one.

Malan, a reserve player in England’s bubble for the ODI series against Australia, was released to make his Yorkshire T20 debut and played confidently as the hosts reached 62 for one after six overs.

However, after Lyth was stumped off Hartley’s left-arm spin, Malan was the first of the two wickets to fall in Parkinson’s first over when he was caught at deep mid-wicket on the slog sweep.

Two balls later, Hill chipped to cover to leave Yorkshire on 87 for four.

Wickets continued to fall in excellent batting conditions as spin dragged things back for a somewhat lucky Lightning side who dropped a trio of catches – two from Tom Bailey.

Wharton, like Hill, was caught at cover off Parkinson – 104 for five in the 15th – before Mat Pillans was stumped off Liam Livingstone’s leg-spin almost two overs later as the score fell to 121 for six.

Left-arm seamer Wood then snapped a run of five wickets to spin when he struck twice in the 17th over, getting Jordan Thompson lbw and Will Fraine caught behind for 24 to make it 124 for eight. Danny Lamb got Ben Coad in the last over of the innings.

Coad then conceded six wides with the first two balls of the Lancashire reply before Pillans and Thompson removed openers Livingstone and Davies.

Livingstone was caught behind and Davies holed out to deep square-leg as the score fell to 35 for two in the fourth.

Lancashire maintained a healthy run-rate, only to lose Steven Croft (27) run out following a mix-up with Vilas and Josh Bohannon bowled via inside-edge by Coad in successive overs. Lancashire were 77 for four in the ninth.

But Vilas and Rob Jones steadied the ship with Lancashire’s best fifth-wicket partnership in the history of this fixture, an unbeaten 71 inside 10 overs.

Jones hit a six over long-on in a career best 38 off 35 balls and hit the winning runs to ensure the Lightning are now unbeaten in this fixture since August 2017.