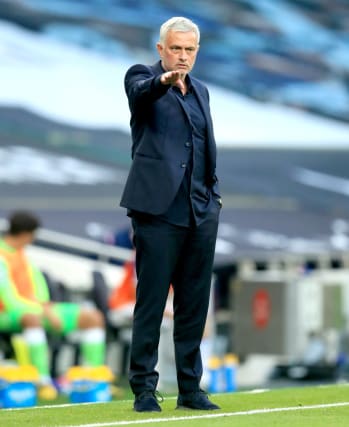 Tottenham boss Jose Mourinho refused to comment on whether he is trying to sign striker Alexander Sorloth, but says the club need to bring someone in.

Mourinho is desperate to add reinforcements to his frontline and it is easy to see why after a dismal showing in the 1-0 defeat to Everton on Sunday.

Trabzonspor president Ahmet Agaoglu has said that Spurs are one of the sides interested in signing Sorloth, but it would be a complicated deal as the Norwegian is on loan from Crystal Palace with the Turkish club having an option to buy.

But Mourinho was not willing to engage on the topic.

“Do we need a striker? Yes we need. Was it because of that we lost the game? No.

Spurs were wretched in the second half and went down to Dominic Calvert-Lewin’s powerful header.

It was a positive start for Everton, who will be hoping that this is the season they can finally crack the top six.

They will be helped by the arrivals of Abdoulaye Doucoure, James Rodriguez and Allan, who all started and impressed in north London.

Rodriguez in particular showed his quality on the left and boss Carlo Ancelotti is optimistic about the contribution he can make.

“First, he has no problem to adapt to the Premier League, because we are not playing a different sport. It’s football, the pitch is the same everywhere,” the Italian said.

“He has to adapt to his team-mates and their movements and the team-mates need to know his quality. But it was an outstanding performance after three or four days training. But this is what he can do on the pitch.”

On starting all three of his new signings, Ancelotti added: “I talked about this with the staff, but they trained properly. I was only a bit worried about James Rodriguez, as he only trained this week.

“So no problems with the other two. But we were in touch with James Rodriguez during the game and he was not so tired. I changed him to lose a bit of time at the end.”