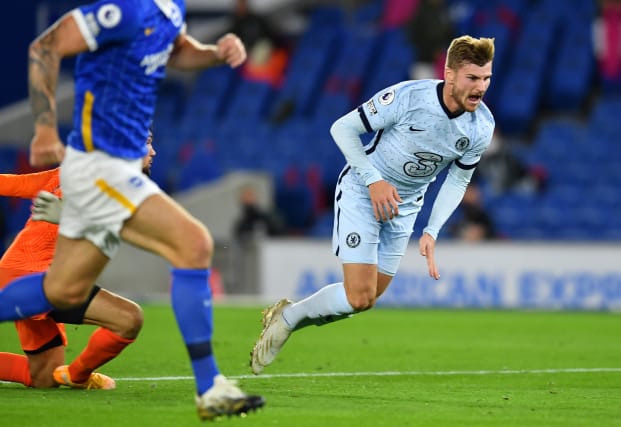 Frank Lampard has backed “real threat” Timo Werner to shake off a dead leg to be fit in time to face Liverpool on Sunday.

Germany hitman Werner impressed on his Premier League debut, winning a penalty as Chelsea eased past Brighton 3-1 at the Amex Stadium.

Jorginho converted the spot-kick that Werner won, with Reece James blasting a fine strike into the top corner and Kurt Zouma adding the third.

Leandro Trossard briefly had Brighton level but Chelsea coasted to the victory despite showing the obvious effects of the coronavirus-disrupted pre-season.

“I was really pleased with Timo, with Timo I know the qualities he’s going to bring to the team,” said Lampard.

“We saw that with the speed to win the penalty, and the moments where he showed his speed and his qualities as well. He’s going to be a real threat, he’s a very mobile centre forward who can do so many things for us.

“So it was nice, and Timo is one that has had some games, and has had a bit of fitness, and you can see that in the way he was tonight. Timo took a knock when he won the penalty. It’s more of a dead leg we hope. I wouldn’t think too much in terms of next week there but I’d think it was a dead leg; we’ve got a bit of time for him to get right.”

Werner impressed throughout his top-flight bow with clever off-the-ball movement and his sheer pace.

The former RB Leipzig man was a summer target for Liverpool, but Jurgen Klopp’s men baulked at his £53million release clause – allowing Chelsea the chance to jump in and seal one of this window’s biggest deals.

Werner had his leg heavily iced after the final whistle, but Chelsea still expect him to be ready to take on the Reds this weekend.

Christian Pulisic was not fit in time for Chelsea’s season opener on the south coast, despite returning to training in the week after hamstring trouble. The USA forward will be a doubt for Sunday’s clash with defending champions Liverpool, but Jorginho should be fine having come off late against Brighton merely through fatigue.

“With Jorginho he was just tired,” said Lampard.

“We’ve had a lot of quarantines at the club, players going away with internationals and we’re not fully fit at the moment. And that’s just the way it is.

“With Christian (Pulisic), he was training with us last week and had a little bit of discomfort a couple of days ago when he was trying to train with us to be in contention for today.

“It would have been a big ask for today but he has had to take a few steps back so we’ll have to see. That’s one that I don’t have big news on at the minute. We’ll need to wait and see.”

Chelsea rode their luck at times against Brighton, not least when Lewis Dunk nodded wide when unmarked just four yards out.

Insisting the Blues will be ready to ratchet through the gears to host Liverpool, Lampard continued: “We will be better, this is our first game and we’ve only been together as a group for four days, we’ve had all the players together and we’ve had two debuts tonight.

“We showed a lot of good stuff, it wasn’t where we want to be in the end, that will take a bit of time, and we will improve for Liverpool as well. But first game of the season it’s all about getting a win, certainly when you come to a place like Brighton. And I think we did a lot of good things to get that.”

Deflated Brighton boss Graham Potter admitted hoping that injuries to Adam Lallana and Ben White do not wind up too serious.

“Hopefully Ben’s not too bad with his ankle either, hopefully it just needs 24 hours to settle down.

“The margins we need to turn, that’s the challenge. I thought we played well overall, matched Chelsea quite well, especially in the first half.

“We more than deserved the equaliser I think but then it was a bit of game management where we got punished for the second. It took the wind out of us a little bit. It’s disappointing to concede three goals overall, and that’s the thing we’re most disappointed with.”