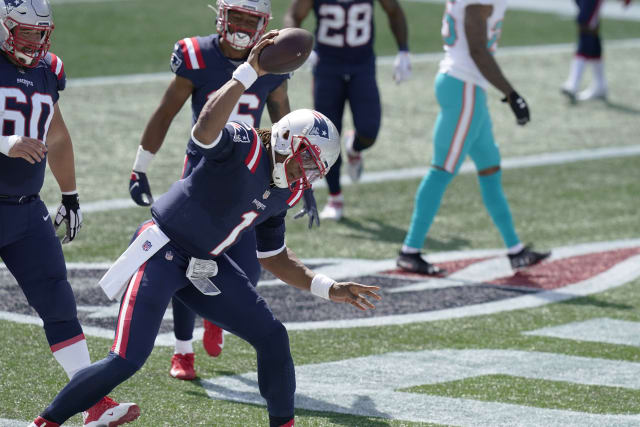 Cam Newton proved himself a useful replacement for Tom Brady with two rushing touchdowns on debut as his New England Patriots beat the Miami Dolphins 21-11.

In their first game since Brady left the Patriots for the Tampa Bay Buccaneers in March, New England were indebted to Newton, who rushed for 75 yards and two touchdowns, with 16 completions from 19 attempts.

Miami struggled offensively for most of the game and saw their top receiver DeVante Parker forced off in the third quarter due to a hamstring injury.

Green Bay Packers’ quarterback Aaron Rodgers threw four touchdown passes, with wide receiver Davante Adams catching two of them, as they opened the 2020 season with a 43-34 win against the Minnesota Vikings.

Lemar Jackson, the NFL’s reigning most valuable player, threw for 275 yards and three touchdowns to help the Baltimore Ravens beat the Cleveland Browns 38-6.

Russell Wilson threw four touchdown passes and completed 31 of 35 passes for 322 yards as his Seattle Seahawks sealed a 38-25 victory over the Atlanta Falcons.

Gardner Minshew threw three touchdown passes, including a 22-yarder to Keelan Cole in the fourth quarter, to help the Jacksonville Jaguars upset the Indianapolis Colts 27-20.

Josh Jacobs ran for 93 yards and three touchdowns and Derek Carr threw for 239 yards and a score in the Las Vegas Raiders’ 34-30 victory over the Carolina Panthers.

Peyton Barber rushed for two touchdowns and Washington registered eight sacks to hand Ron Rivera a 27-17 win against the Philadelphia Eagles in his debut as head coach in the US capital.

The Chicago Bears held on to beat Detroit Lions 27-23 after Mitchell Trubisky’s 27-yard touchdown pass to Anthony Miller with less than two minutes remaining and the Buffalo Bills secured a season-opening 27-17 win against New York Jets.

The Cincinatti Bengals were left to rue a missed 31-yard field goal that would have tied the game with seven seconds left as they went down 16-13 to the Los Angeles Chargers.

The San Francisco 49ers gave up a ten-point fourth quarter lead against Arizona with a rampant Kyler Murray mounting a late comeback to guide the Cardinals to a 24-20 win.

Tom Brady’s new chapter with the Tampa Bay Buccaneers got off to a lacklustre start as he gave up two intercepts, one of which was returned for a pick-six, in a 34-23 loss against the New Orleans Saints.

And a mammoth effort from Ezekiel Elliott, which included 96 rushing yards and two touchdowns, was not enough for the Dallas Cowboys to earn a victory over the Los Angeles Rams as they went down 20-17.