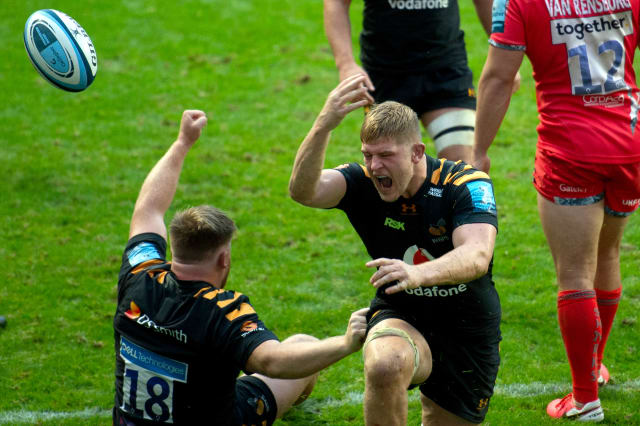 Wasps continued their charge towards the Gallagher Premiership play-offs by crushing title rivals Bristol 59-35 at the Ricoh Arena.

Bristol boss Pat Lam made 12 changes from the team that beat Northampton five days ago, seemingly with one eye on next Friday’s European Challenge Cup quarter-final against the Dragons.

Jimmy Gopperth added three conversions, and there was no way back for Bristol as Wasps made it nine wins in their last 10 Premiership games.

It means they will hold a top-three place going into the final two rounds of regular season action, but Bristol, who were two points ahead of Wasps before kick-off, will be fourth at best.

Fly-half Max Malins, meanwhile, dominated Bristol’s scoring, posting two tries and kicking four conversions for an 18-point haul, while centre Piers O’Conor also touched down and there was a late penalty try and Peter McCabe score as they claimed a losing bonus point.

Captain Joe Launchbury made his 150th Wasps appearance, and was partnered in the second-row by Wales international Rowlands, while the Willis brothers Jack and Tom packed down together in a powerful back-row.

And Wasps flew out of the blocks, going ahead with just 40 seconds gone after flanker Brad Shields charged down an attempted Bristol clearance by scrum-half Chris Cook, and Jack Willis finished off.

Gopperth missed the touchline conversion attempt, but Wasps had already served notice of their blistering form, and worse was to come for the visitors.

This time they were undone by Bassett’s fine run that took him inside and outside Bristol defenders, and the visitors could not lay a finger on him as he touched down and Gopperth converted.

The one-way traffic proved unrelenting, and Wasps had a bonus point inside the opening quarter as Cruse touched down following a driving maul, then Rowlands scored following sustained pressure.

Gopperth converted both tries and Wasps led 26-0, with Bristol seemingly down and out with still over an hour of the game remaining.

Bristol did not mount a meaningful attack until the 22nd minute, and the only blemish for Wasps was seeing prop Kieran Brookes go off injured.

Bristol, to their credit, kept Wasps scoreless for most of the second quarter and managed two quality tries of their own as Malins claimed a fine individual score, before linking with O’Conor three minutes later.

Malins’ two conversions made it 26-14 at, but Wasps struck again before the interval when Kibirige showcased his pace to cross wide out.

And Kibirige was involved again six minutes after the restart, sprinting clear before finding Robson with an inside pass, and the scrum-half finished easily, before Gopperth’s conversion took Wasps 24 points clear.

A penalty try then followed after Wasps’ exerted scrum pressure that Bristol could not cope with, taking the home side past 40 points, before Saracens loan signing Malins served further notice of his quality by collecting his team’s third touchdown.

But Wasps scored an eighth try 11 minutes from time – number eight Tom Willis the beneficiary of more aggressive work by the forwards – and all Bristol had left was to strive for a try-scoring losing bonus point.

And it arrived via a penalty try in the 73rd minute, yet Wasps typically scored try number nine, via substitute hooker Oghre, then McCabe’s close-range effort and Malins conversion completed the scoring.