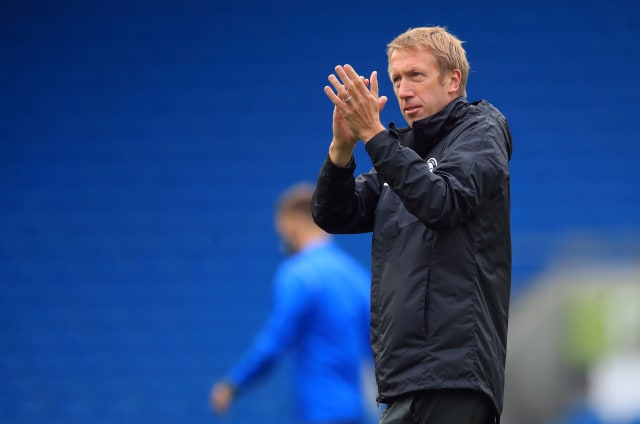 Graham Potter believes Chelsea’s substantial recruitment drive is exciting for the Premier League and has urged Brighton’s players to embrace taking on the division’s biggest spenders.

The west London club were under a transfer embargo when manager Lampard was appointed last summer and have wasted little time in making up for the sanction by investing heavily this time around.

Potter insists facing world-class opponents is part of the thrill of competing in the top flight and wants his squad to relish the tough assignment.

“There’s a chance that the top teams will invest. Everyone does it in different ways, of course.

“But for us we just need to take the challenge on, embrace it, it’s what we’re here for, to test ourselves against the best.

“We’re lucky that we are here (in the Premier League) and we’re going to do everything we can to keep fighting and try and get points.”

Midfielder Ziyech, signed from Ajax, and former Leicester left-back Chilwell will not feature on the south coast due to injuries.

He admits it may be advantageous to face Lampard’s men early in the campaign while the new arrivals are still adapting to unfamiliar surroundings.

“Who knows? I can’t predict that. There is an argument for (that),” said Potter.

“But the players are top players and they could just gel very quickly and hit the ground running.

“I can’t control how quickly Chelsea become the team they want to become.

“I’ve just got to focus on my team and help them get to the maximum level they can because if we don’t do that it doesn’t matter what Chelsea do, we’re going to struggle.”

Brighton and Chelsea met just over a fortnight ago in a friendly used as a pilot event for the return of supporters.

Potter expects that warm-up match, a 1-1 draw played in front of just over 2,500 fans, to have little bearing on the forthcoming behind-closed-doors clash.

“It was a good exercise for both teams, but I would say that’s all it was really,” he said.

“We used it to pilot the supporters coming back, which was really successful, it was nice to have some supporters in the ground.

“Both teams used it for what it was, there were lots of changes made. We’re expecting a different type of game in the Premier League.”