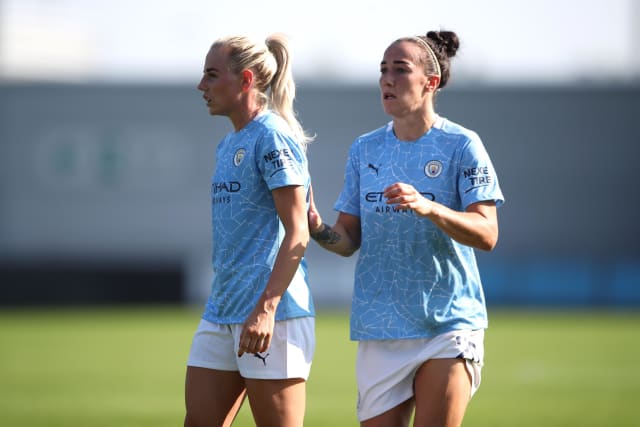 Chelsea clinched their first win of this season’s Women’s Super League in style by putting nine past Bristol City, but Lucy Bronze was unable to make an impact for Manchester City as they drew a blank against Brighton.

Fran Kirby’s first goal in more than a year following a viral illness was followed by Maren Mjelde’s penalty plus strikes from Melanie Leupolz, Erin Cuthbert and Millie Bright which put the Blues 5-0 ahead at the interval.

Beth England extended the lead even further, Niamh Charles marked her debut with a goal and fellow substitute Pernille Harder also struck before Sam Kerr became the ninth separate goal-scorer in a 9-0 demolition at Kingsmeadow.

England full-backs Bronze and Alex Greenwood were both named in Manchester City’s starting XI to face Brighton after signing from Lyon earlier this week.

But, while City dominated possession and created more chances, they were stifled by a well-organised Brighton defence and some excellent saves by goalkeeper Megan Walsh.

Brighton, who only gained one point away from home in all of last season, had to battle to the final whistle to keep their star-studded opponents at bay but they did so wholeheartedly to earn a share of the spoils.

Manchester United came from 2-1 down to thrash Birmingham 5-2 for their first win of the campaign, with Kirsty Hanson bagging a brace for Casey Stoney’s side.

Jane Ross put United ahead but the hosts rallied when Claudia Walker’s leveller was followed up by Abbie McManus directing into her own net.

Katie Zelem equalised before half-time and Ella Toone put United ahead for a second time shortly after the interval before Hanson made sure of all three points.

Reading responded to a 6-1 thrashing by Arsenal last time out by overcoming Aston Villa 3-1.

Amalie Eikeland and Lauren Bruton struck before Fara Williams’ penalty put the Royals three goals to the good at the break, rendering Stine Larsen’s spot-kick late on a consolation.

Isobel Christiansen’s goal six minutes into the second half helped Everton to their second win in two games as they edged out Tottenham 1-0.